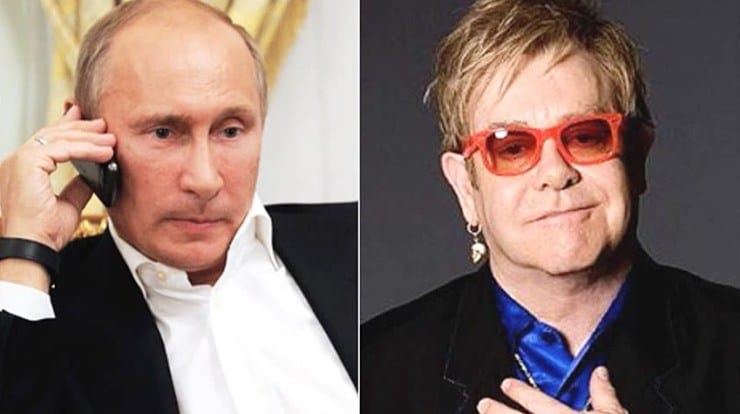 Russian President Vladimir Putin has backed out of a scheduled meeting with Sir Elton John to discuss what John has called Russia’s “ridiculous” anti-gay law.

That law, commonly referred to as the country’s anti-gay “propaganda” law, was passed in June of 2013 and bans the “promotion” of homosexuality to minors. The law has led to increased homophobic attacks in Russia as well as in former Soviet Republics still heavily influenced by Russian media.

…the Kremlin now claims that a scheduling conflict means there will be no meeting next Monday when John is due in Russia to play a concert at a top Moscow venue. […]

“We were in correspondence a couple of weeks ago, because there was an agreement that, if their schedules allow, this meeting could take place,” said Dmitry Peskov, a spokesman for Putin.

As of this posting, John has yet to publicly respond to the news.

The meeting came about after John received a phone call from pranksters pretending to be Putin. John blasted those pranksters, saying, “Homophobia is never funny.” Putin actually did reach out to John and proposed a meeting.