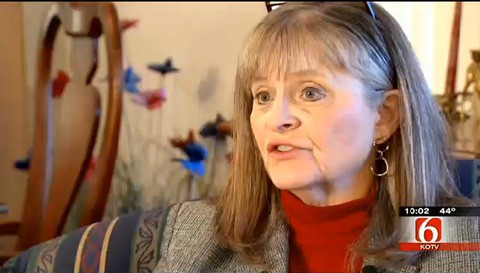 Republican Oklahoma state Rep. Sally Kern, who’s among the nation’s most outspoken anti-gay bigots, will leave office at the end of the year due to term limits.

And Freedom Oklahoma, the statewide LGBT group, plans to celebrate Kern’s departure — as well as the defeat of anti-equality legislation in this year’s session — with a $35-a-ticket fundraiser later this month. From the Facebook event page:

On Tuesday, May 24th, Freedom Oklahoma will be sending Sally Kern off in style as we celebrate the end of her term in Oklahoma State House. Without lawmakers like her bringing so much attention to LGBTQ inequality, we would not be where we are today.

As you know, Oklahoma could have easily gone down the path of North Carolina and Mississippi, but for Freedom Oklahoma. After the onslaught of 27 anti-LGBTQ bills faced in January, we made it through the legislative session without a single one becoming law. It took an unprecedented effort at the Capitol to defeat so much hate, but we were victorious!

Now, we have the opportunity to take the next step in securing protections for our community. We are saying goodbye to over 20 members of the Oklahoma legislature this term – including Rep. Sally Kern, and we need to find allies to replace them.

Kern became a national figure in the anti-LGBT movement in 2008, when she said “the homosexual agenda” poses a greater threat to the US than terrorism — a claim she has repeated several times over the years, including in her 2011 book, “The Stoning of Sally Kern.”

Although Kern has faded somewhat from the anti-gay limelight in recent years, her bigotry has continued unabated. In this year’s legislative session, for example, she introduced legislation — dubbed by opponents an “LGBT suicide bill”  — that effectively would have required school officials to out gay youth to their parents. And last year, she introduced bills to undermine the U.S. Supreme Court’s ruling in favor of same-sex marriage and to allow businesses to turn away gay couples.

“We picked her for very obvious reasons,” Freedom Oklahoma Executive Director Troy Stevenson told The Tulsa World. “She said some pretty atrocious things about the LGBT community. I don’t know that any legislator in this country has said worse.”

“I can tell you all LGBTQ Oklahomans look forward to Rep. Sally Kern’s last day in public office,” said Toby Jenkins, executive director of Oklahomans for Equality in Tulsa. “She has given 12 years of constant attack against gay, lesbian and transgender Oklahomans. She believes what she believes, and she is not even open to the idea that she might possibly be wrong.”

Listen to Kern’s remarks from 2008 below.