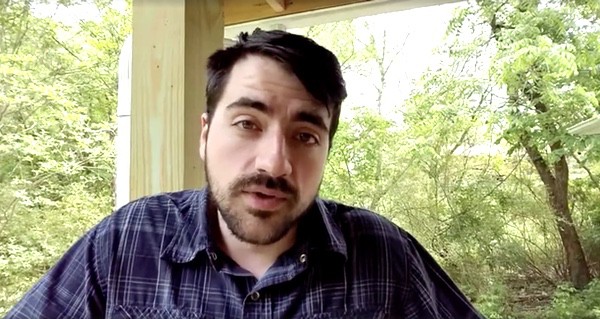 If you’re a follower of this site or the internet in general, you’re probably by now familiar with “Liberal Redneck” Trae Crowder, whose videos expostulating on various subjects like Ted Cruz or transgender bathroom bills have gone viral in recent weeks.

The Last Word wanted to get to know Crowder better, so they did a web interview with him, which answers a lot of the questions you’ve probably had while watching his videos.

Is “Liberal Redneck” a character or is it really him?

Crowder says “it’s just a character in that it’s an exaggeration of who I actually am. I did grow up super redneck, I have always been very liberal in terms of ideology or whatever, so really the only thing that makes it different is that in person I’m not as aggressive or in your face about my beliefs or whatever. I did that because I feel like that’s how a lot of rednecks are though….and so I wanted to turn that around on them.”

Crowder says he grew up in “abject poverty” and he thinks it “should be the natural inclination of most really poor people to be liberal – otherwise, you’re going against your self interests” but that most “rednecks” are not liberal because of Jesus.

Why isn’t Crowder that way? “I just ain’t been particularly down with Jesus, and most of the reason for that is because my uncle, whom I love dearly, is gay, and so I just didn’t appreciate a lot of the things the church had to say about him growing up.”

Crowder goes on to talk about his comedy career, his upcoming tour, the 2016 election, and the other issues that upset the Liberal Redneck.

“You name it I’ve got an opinion about it.”