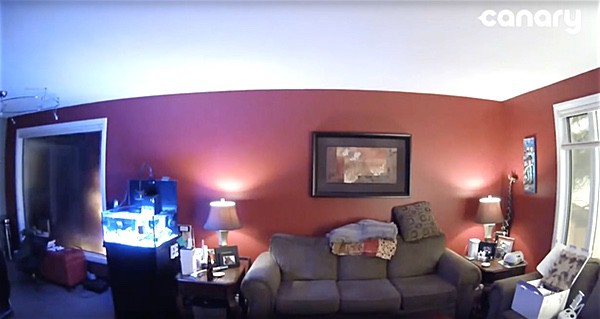 The devastating Fort McMurray wildfire in Alberta has forced the evacuation of 80,000 people, and destroyed 2,400 homes while damaging more than 500. Prime Minister Justin Trudeau is scheduled to visit the area today and meet with first responders, the Globe and Mail reports.

One homeowner who lost everything watched it all go down over his home security system which included a video monitor viewable through an iPhone. The homeowner uploaded the video to Storyful and the terrifying clip reveals how quickly everything was gone. James O’Reilly shared the video with The Star as well.

O’Reilly was in his truck, his wife in a vehicle behind, at Gregoire Lake south of town when he watched his home destroyed. He’d just driven through six packed lanes of traffic, the air full of so many embers it looked like fire brushing the sides of the camper he was pulling, and he says the adrenaline softened the blow—but now, it’s starting to settle in.

“We’ve been talking for two days about all the things we left behind,” he said. “We left pretty much all our important papers, some important pictures.”

He adds he also feels bad about the two clown fish left in the tank, just two of many animals that were left behind.

The Globe and Mail has also posted a page where you can help fire victims and receive help.

And here is a link to the Canadian Red Cross page for the Alberta fires.