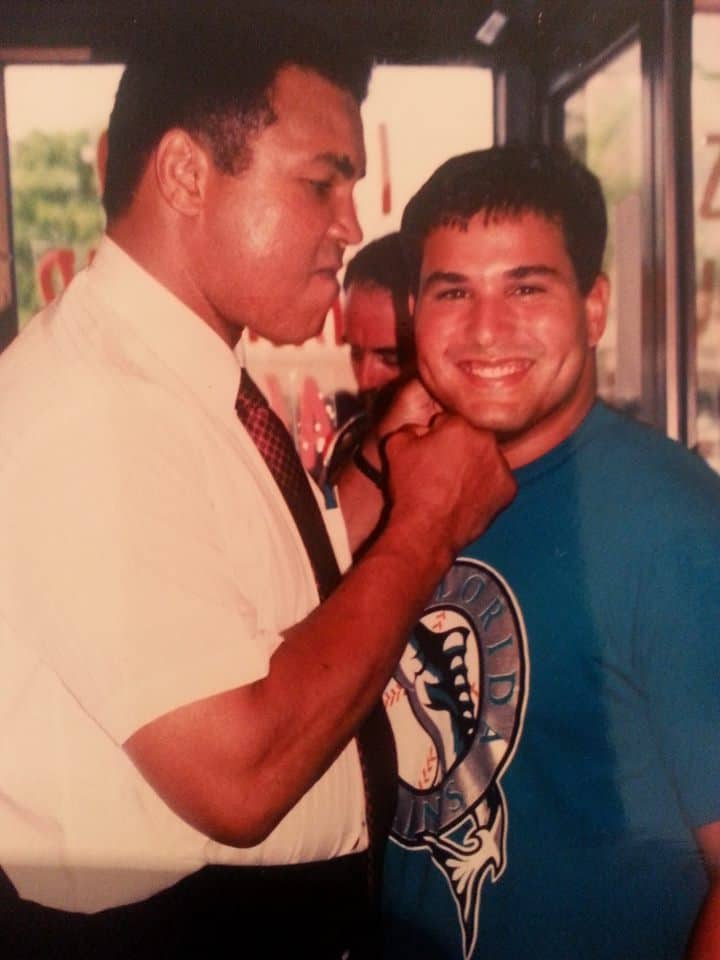 Ali died late on Friday at a hospital in Phoenix, Arizona, the family’s spokesperson Bob Gunnell said. His funeral will take place in his home town of Louisville, Kentucky.

Ali was admitted to hospital on Thursday with a respiratory problem – a move that was described at the time as “a precaution”. However, reports emerged 24 hours later which said he had been placed on a life support machine and his family “feared the worst”.

Ali had become increasingly frail since being diagnosed with Parkinson’s disease in 1984, aged 42, and in recent years had limited his public appearances. Earlier this month his brother Rahman Ali revealed that the condition was so advanced he could barely speak or leave his house.

The photo at the top of the article is one dedicated to the public domain by a fan who wrote:

Watching a story about Muhammad Ali on the Today Show. Made me think back to the day I met the greatest. It was in the 1993 at the old Bakery Center. I went to have a magazine signed by The Greatest during a book signing at Books & Books. Although everyone was happy to get their book signed, say a few nice words, and move on; I being a 23 year old said what the heck, why not ask for a picture with him.

I said, Champ, mind if I take a picture with you? Everyone looked at me like I was crazy. Ali, by that time, stopped speaking publicly for all practical matters. Ali looked at me and said, come around here boy!. Of course, I did, going around the signing table. Then he grabbed me by the neck and asked me do you know who I am? I said of course, your are The Champ. He said no, I am the greatest of All Time!!! and pretended to knock me out. Everyone started cheering and applauding! He then proceeded to sign my magazine.

One of the greatest moments of my life!!

In his 2004 memoir, The Soul of a Butterfly, Ali wrote how he wanted to be remembered:

I would like to be remembered as a man who won the heavyweight title three times, who was humorous and who treated everyone right. As a man who never looked down on those who looked up to him, and who helped as many people as he could. As a man who stood up for his beliefs no matter what. As a man who tried to unite all humankind through faith and love.

And if all that’s too much, then I guess I’d settle for being remembered only as a great boxer who became a leader and a champion of his people. And I wouldn’t even mind if folks forgot how pretty I was.

The sentiment was shared by author JK Rowling via Twitter and shared widely across the web following his death.

Unsurprisingly, he said it best himself. #MuhammedAli pic.twitter.com/G1BykvvzfF

A documentary on the boxer noted that at one time there were rumors that he was gay because he had so many women around him yet only wanted to concentrate on his sport:

Another clip being shared on social media is this one in which he pranks children:

Previous Post: « Gay Couple in Morocco Thrown in Jail for Having Sex in their Car
Next Post: Texas Democrat Fights Back Against GOP Leaders’ Anti-Trans Bigotry, Proposes Statewide LGBT Protections »