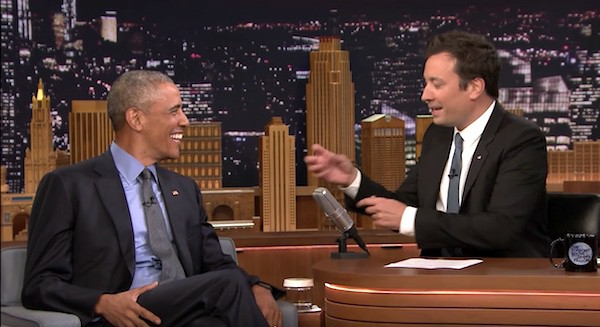 Before he slow jammed the news and wrote a few Thank You notes, President Obama sat down with Jimmy Fallon on The Tonight Show to go over some more serious business.

They discussed being the first sitting president on The Tonight Show, whether Obama is getting sad his presidency is over and getting sentimental about leaving, his new home in D.C. (he and Michelle are staying because Sasha is still in school), and Malia’s upcoming graduation.

They then moved on to the election. Obama said he has spoken to both Hillary and Bernie at certain points during the campaign.

Said Obama: “I thought that Bernie Sanders brought enormous energy and new ideas. I thought that it made Hillary a better candidate…My hope is that over the next couple weeks we’re able to pull things together.

Obama said that during primaries things tend to get “a little ouchy” and that a natural process will iron things out.

“I’m sure they’re going to have a conversation,” he said, adding, “The main role I’m going to be playing in this process, is to remind the American people that this is a serious job. This is not reality TV.”

When asked by Fallon if he thinks Republicans are happy with their choice of Trump, Obama responds, “We are.”

Added Obama: “That was too easy. Actually, I am worried about the Republican party, and I know that sounds….uh…you know what that sounds like.

Has Donald Trump called him for advice? “No he hasn’t. Not that I know of.”

Fallon asked Obama about SCOTUS nominee Merrick Garland and whether Obama would ever want to join the Supreme Court.

“I look pretty good in a robe, but I don’t think it’s something that is the best way for me to spend my time after I leave office.”

Fallon also talked about his first awkward meeting with the President and First Lady and where the President might go on the day he leaves office.