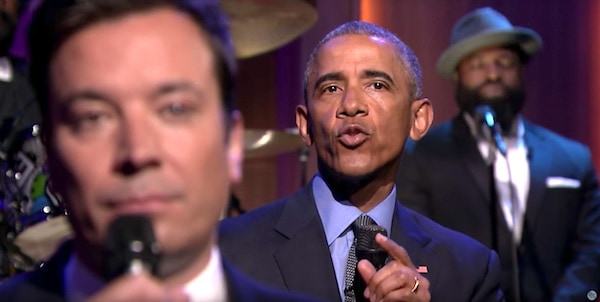 This time he talked about his legacy as Commander in Chief and brought in his marriage equality accomplishments:

“As President I’m proud of the many progressive steps our country has taken in recent years both socially and environmentally. The United States has been a leader in developing clean energy to ensure the health of our planet for future generations. Thanks to the Affordable Care Act, an additional 20 million Americans now have access to quality health care. And same-sex couples across the country now have a right to marry. In short, climate change is real, health care is affordable, and love is love.”

In another comedy bit, Obama and Fallon wrote ‘Thank You’ notes together.

Previous Post: « Madonna Performs ‘Borderline’ on ‘The Tonight Show with Jimmy Fallon’ – WATCH
Next Post: Get Ready To Be Teased by Gay Indie Drama ‘Retake’ – WATCH »