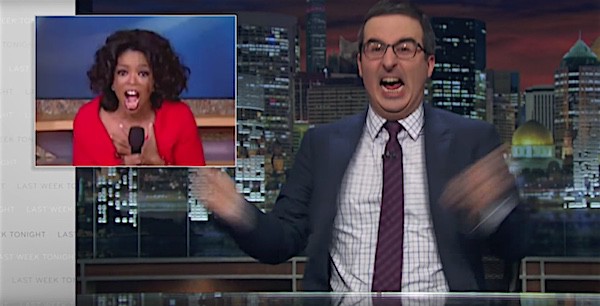 Last night, John Oliver took on the debt-buying industry and decided to lead by example: he created his own debt-buying company called Central Asset Recover Professionals, short for, “C.A.R.P., after the bottom-feeding fish.”

“Almost every step of how this industry is allowed to operate is problematic,” Oliver explains.

Soon after, he was offered nearly $15 million in medical debt for less than $60K. But instead of setting out to collect the debt, he decided to forgive it, partly because “it was the right thing to do” and partly to claim bragging rights to “the largest onetime giveaway in television history.” The previous record holder, per Oliver? Winfrey, who back in 2004 gifted each member of her entire studio audience with a free car, to the tune of $8 million.

Oliver ended the show but playfully shouting, “F–k you, Oprah!”