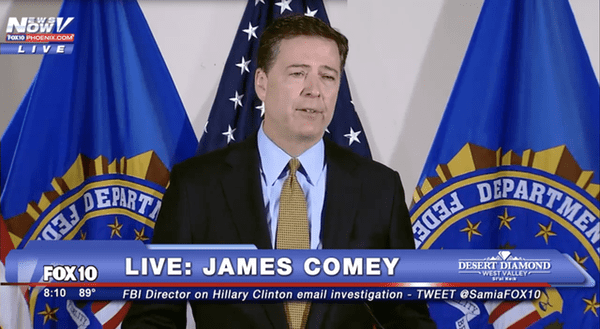 FBI Director James Comey says the Bureau will not be filing charges against Hillary Clinton for her use of a private email server during her tenure as Secretary of State.

Comey called the investigation “credible” and one that had no outside political influence. He also said that no one at The White House or in the Clinton campaign knew the outcome of his investigation prior to his announcement this morning.

Comey, a George W. Bush appointee, did say that Clinton and the State Department did not use the best judgment in how they handled her email and the server.

Comey said that although the investigation found “extremely careless” behavior by Clinton and her staff in their handling of sensitive information, the FBI had concluded that “no charges are appropriate.” He said the agency believed that “no reasonable prosecutor would bring such a case.”

The announcement came three days after the FBI interviewed Clinton for hours in a final step of its yearlong investigation into the possible mishandling of classified information.

Attorney General Loretta Lynch said last week that she would accept the recommendations of the FBI director and of career prosecutors, meaning that Comey’s decision almost certainly brings the legal part of the issue to a close and removes the threat of criminal charges.

Watch part of Comey’s remarks, below.