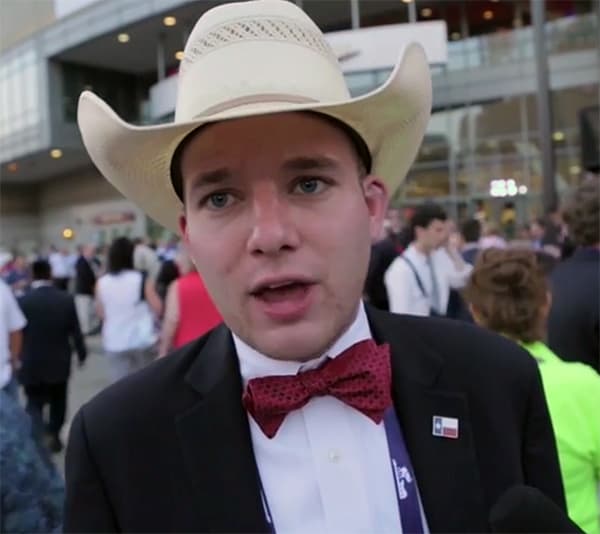 After the GOP stunned the political world with its most anti-LGBT platform in the party’s 162-year history with provisions supporting gay conversion therapy, endorsing anti-trans bathroom bills, and even denying marriage rights for LGBT couples, it became noticeably harder for gay Republicans to stand by their party.

Rachel Hoff, the first openly gay Republican on the party’s platform committee considered leaving the Republican Party for the first time in her life.

Log Cabin Republicans’ president Gregory T. Angelo couldn’t hide his disappointment and wrote on a fundraising email: “There’s no way to sugar-coat this: I’m mad as hell — and I know you are, too.”

In full Texan gear, complete with a cowboy hat, a Texas pin and a red bow tie, Buckley explained to Slate why he’s still a GOP supporter: “I’d rather deal with a Republican who’ll say ‘I don’t necessarily agree with you,’ than deal with someone who aligns themselves with Hillary Clinton and the Democrats,” he said adding that “the Clinton Foundation has taken tens of millions of dollars from Saudi Arabia nations, [sic] where if I live there as a gay man, I’d be publicly executed.”

Buckley is a “practicing Baptist” who is “found in church every Sunday morning.” He came out of the closet two days after the Orlando tragedy and said that he got “lots of support from federal, state and local officials, party activists, etc.”

He feels embraced by the party “for the most part,” except for that “slim, quarter-page of the platform,” referring to what The New York Times called the most extreme Republican platform in memory.

But the small detail in the platform that states that “our laws and our government’s regulations should recognize marriage as the union of one man and one woman,” doesn’t bother Buckley too much. The self described “fiscally conservative and socially awesome” young Republican is not a big fan of equality, anyway. “I may be one of the most conservative gay Republicans here because of the fact that I don’t believe in same-sex marriage,” he said.

“Marriage is a religious term between a man and a woman,”  he concluded.