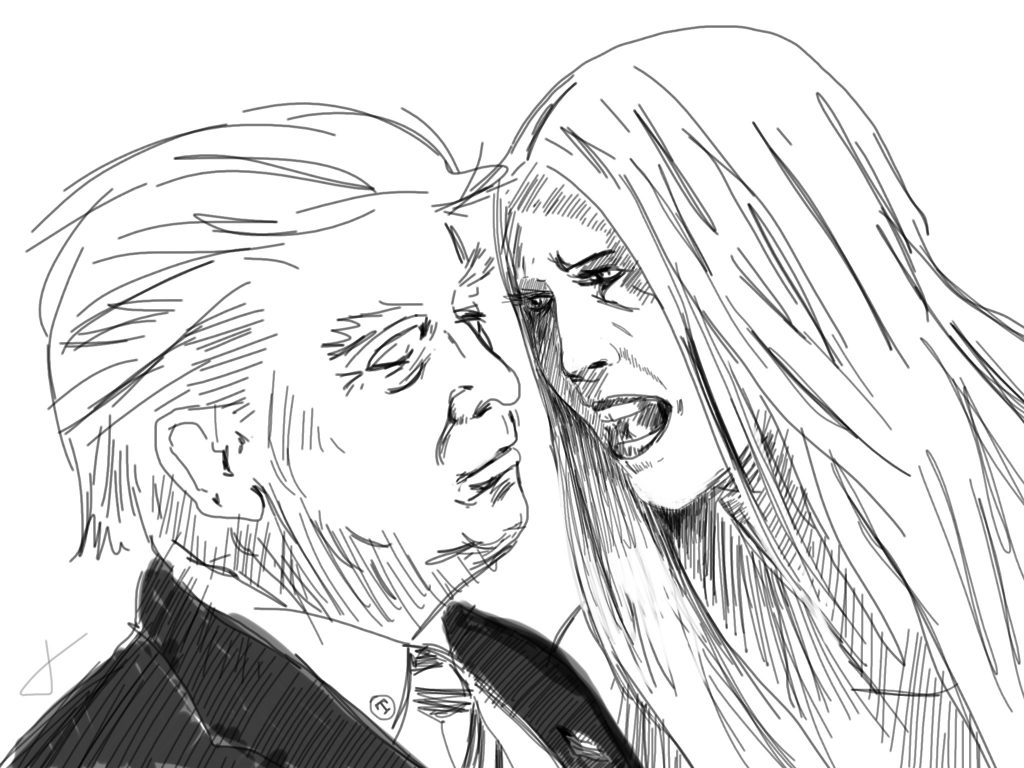 “Papa, I won’t be humiliated tonight. Not one more time.”

“Of course not, angel.” Donald wasn’t looking at her. “What are these bags doing here? It’s time to put on your pretty pink dress you’re selling.”

“Really? What do you call last night? What do you call me being degraded on national television? Do you have any idea that I am the one thin line between you and complete chaos on that floor? Do you think I’m going to dress up like Caitlin Jenner in this godforsaken burg and save YOUR ass again?”

Little Barron walked into the hall and started yanking open a series of Louis IV drawers looking for spare Tubmans and candy. “Daddy made the bad man fly!  Daddy made the Cruz man fly!”

He reached up to Ivanka’s blouse as if there might be something hidden in there, too. She elbowed him and he yelped.

“Papa— get your Mother-of-the-Year in here to collect her insufferable brat!”

Donald bellowed down the gold corridor: “Hey, ‘Michelle Trump,’ would ya get in here and feed our little man? He’s hungry. Princess and I gotta deal to close.”

He peeled Barron a few bills off his wad and gave the boy’s ass a scooch out the door. “Go play in your mother’s underwear drawer, will ya?”

Ivanka hadn’t made one move to put on the $138 Macy’s sheath from her own Collection. It was cut a little funny, and Melania had laughed at it— but Donald said Ivanka would be a knock-out in a burlap sack.

Still, her hair looked like straw. Her mascara was smeared from last night’s debacle. And she knew it.

“Look, Papa, I’ve talked to Jared and he said I don’t have to do this.”

“Baby! Tinka! You know I can’t do this without you!” Donald assumed a submissive pose few in public have seen.

“Apparently you can’t do it with me, either. I’ve lost every friend I’ve ever had. While I’m sitting in your VIP fight cage with those morons, Chelsea is drinking with all our old friends and making a life for herself. A life *I* had, exactly one year ago.”

“Whatever you want, princess, sweetheart— you know I’ll do anything— you’re always right.” He reached for Ivanka’s arm but she was more agile than any of his WWE fighters.

She reached into her bag and handed him a neatly-typed speech.

“I’m going to lean in tonight, Papa, and you— you are going to bend over, backwards. You are going to get down on your knees in that fucking Payday Loans Arena  and thank our gay friends who make all of this possible— she waved toward the floor-to-ceiling French Baroque.

“Baby, baby, you know I love our fagola friends. Sebastian, Sebastian, what was I sayin’ about him last night, he makes the best calamari—”

Ivanka picked up a half-filled champagne goblet and dashed it to the floor.

“YOU. CANNOT. SAY. FAG. in front of a national TV audience”—she marched up close to her father, her Louboutin heels crushing what remained of the broken crystal.

“Honey, sweetheart, you’re getting your face all wrinkled. Papa can say it, see, look at me… “L-B-G-F-Fuggedaboutit!”

She stared at him.

“You think— you think this is another one of your jokes.” Ivanka pulled another piece of paper out of her pantsuit.

Huh, when did she start wearing pantsuits?

“Here’s my plane ticket,” she said, “I’m leaving this Orange Wedding in one hour.”

Donald looked at the commercial flight paper, and blanched.  “L.G.B,T,Q,” he whispered.

“Louder, Papa. Louder.—And what are you going to do with all those fundamentalist mouth-breathers you stuck me with last night? Lynne Patton was sitting with a bunch of cowboys who wanted to touch her HAIR!”

“Baby, seat them in Siberia, I don’t care. LGBTQ! LGBTQ!”

And so it came to pass, that after four days of numbing bigotry and bloodthirsty raving, a five-year-old African-American Girl came out in big white bows and sang, “Let there Be Peace on Earth.”

Little Barron was prodded into the VIP cage and cuddled with Tiffany before he slouched and stuffed his hands in his pockets. There was no more candy— Mom was such a bitch.

Ivanka nailed it. Papa knew she wouldn’t let him down. The Donald had triumphed. He strode on stage to embrace his Favorite, the one little girl he respected in the whole wide world. He’d even let her have her Chelsea Clinton tea parties after this thing was all over.

He whispered how proud he was, in her pearled ear. Ivanka’s eyes were far away but they just needed a little work and she’d look like a millennial again.

With one last burst of proprietary devotion he reached his hand around her little pink number and squeezed her ass. This was going to be a great Presidency—believe me.

Susie Bright live-tweeted and reported for Towleroad @TLRD throughout the 2016 GOP Convention.