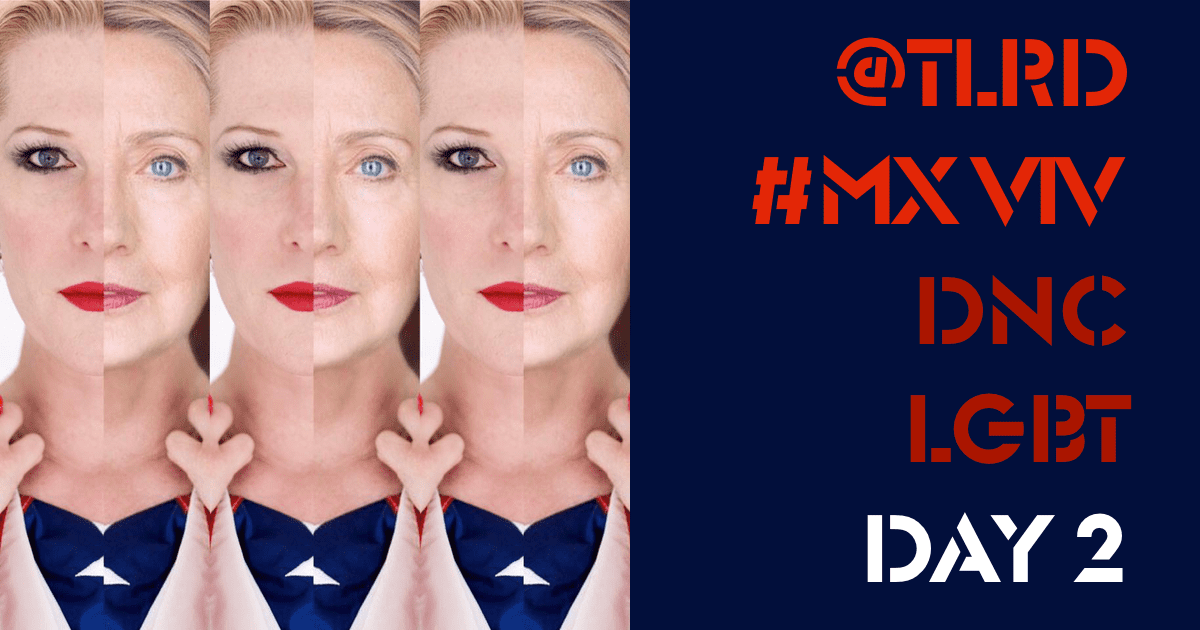 Last night, after walking around in the heat and humidity for hours on end I decided to head back to the Show Biz Safe House to slap some Fresca on a panty shield and get myself together before finally making my way to the Wells Fargo Center for the convention. As I was getting ready a huge thunderstorm began to rage outside. It was Biblical. My host offered to drive me so we traveled to South Philly through the storm. After being stopped and redirected at several security checkpoints he lied and said he was an Uber driver and we finally got in.

I made my way through the security check and strolled into the main hall just in time to catch Sen Kirsten Gillibrand’s speech. I was so excited! Perched next to a group of journalists who were tap tapping away at their computers I had the perfect spot to witness my first convention live. I was having a blast and feeling very special: tweeting, live streaming on Facebook, Instagramming the crowd. I couldn’t believe my luck. Unfortunately it wasn’t to last long. Just as I was composing a tweet about Al Franken a Secret Service Agent tapped me on the shoulder and told me I had to move.

I spent the next half hour, as Sarah Silverman laid into the Bernie or Bust guys, wandering the halls trying to find a place to gain access to the main hall without a Secret Service clearance. No dice!

On my travels I passed Rep. John Lewis, David Schwimmer, and tv screens with Paul Simon singing, but all I got when I tried to go in was “no entrance.”

Feeling like failure I hopped on the train and headed back to The Beardquarters and a good stiff whiskey.

I’ve since heard Michelle Obama made the world cry. Gonna have to YouTube that one!

This morning I woke up and headed out to connect with the local queer activists and protesters.

There was a big action taking place at the Mazzoni Center, a local health center serving the LGBTQ and Poz communities. Word was out that the haters from the Westboro Baptist Church were going to be there to harass the transgender community as they entered and left the building.

The Philadelphia queer community and many wonderful out of town guests showed up to create a wall of safety. It was beautiful.

While I was there I had the opportunity to speak with Brandi Bowers, a transwoman and DNC delegate, artist Joe Ovelman, Nellie Fitzpatrick, the Director of LGBT Affairs for the office of the Philadelphia mayor, Christopher Bartlett, director of the William Way LGBT Community Center and to film the gorgeous, inspiring kids who were there to protect their own.

After all that I needed a beer. On my way to the closest watering hole I ran into New York City Councilmember Jimmy Van Bramer who granted me an interview. Jimmy told me he’d been very close to Hillary Clinton and that she smells better than I do. Hmmm…

Well, it’s been quite a ride so far. I’m now sitting in the press pen and I just watched incredulously as Bernie Sanders officially declared “she who smelleth like a rose” the official nominee of the Democratic Party.

Whether in the hall or on the street it’s an extraordinarily exciting time to be in Philadelphia.