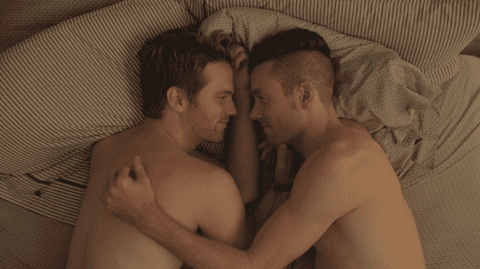 Looking for something to stream while you Netflix and chill? Check out our picks for new additions to streaming services this month below, including campy classics like Mommie Dearest, Mean Girls, Gentlemen Prefer Blondes. Plus, EastSiders seasons one and two come to Netflix.

As if you don’t already have this film that launched a thousand catchphrases already memorized, now you can watch the Tina Fey-penned masterpiece (and Lindsay Lohan’s greatest performance) any time you want. That is so fetch!

It may be most famous for Marilyn Monroe’s iconic “Diamonds Are A Girl’s Best Friend” number, but this classic musical comedy is packed with wall-to-wall laughs and surprisingly bawdy humor.

Barbra Streisand plays the 1890s equivalent of Tinder as matchmaker Dolly Levi in the film adaptation of this stage musical. But, come on, you know all this already. You don’t really need me to tell you about a Streisand film, do you?

No Paula Abdul required: We definitely think these kids can dance. A documentary that follows six young ballet dancers competing at the Youth America Grand Prix, pushing their bodies to fulfill their dreams.

Pull up those legwarmers, and pull down the shoulder on that slouchy sweatshirt. It’s everyone’s favorite film about a cabaret dancer/steel welder.

Sure, everyone knows about the wire hangers, but almost every moment in this camp classic is deliciously quotable. If you’re not fluent in this film, you’re missing out on a good chunk of references flying by in most gay conversations. Even RuPaul’s new gameshow, Gay For Play, quotes the film in every episode.

Jennifer Coolidge makes everything she’s in a little more gay, not like this Christopher Guest film needs any help in that department. We’re still waiting for our next issue of American Bitch magazine.

HBO’s pioneering gay dramedy Looking gets some closure with a special wrap-up film. Whether you loved the series or loathed it (we’re in the former camp), we can all agree the world is better off with a little more of Lauren Weedman’s Doris in it. Forget where we left off? Catch up with our Looking recaps.