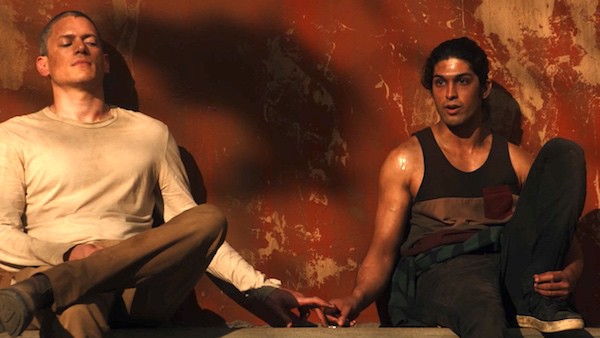 New footage from the reboot of Prison Break starring Wentworth Miller debuted over the weekend at San Diego’s Comic-Con, as well as a new trailer.

The clip shows a gay prisoner who faces death at the hands of his fellow inmates for homosexuality, and Miller’s attempt to help him out by getting a plot rolling with a stick of gum. It’s set in Morocco.

The original action drama centered on Michael Scofield (Miller), a young man determined to save his convicted brother, Lincoln Burrows (Purcell), from death row by hatching an elaborate plan to escape from prison. In the all-new event series, filmed on location in Morocco, clues surface that suggest a previously thought-to-be-dead Michael may be alive. Lincoln and Sarah (Sarah Wayne Callies), Michael’s wife until he was assumed dead, reunite to engineer the series’ biggest escape ever, as three of Fox River State Penitentiary’s most notorious escapees, Sucre (Nolasco), T-Bag (Knepper) and C-Note (Dunbar), are pulled back into the action.