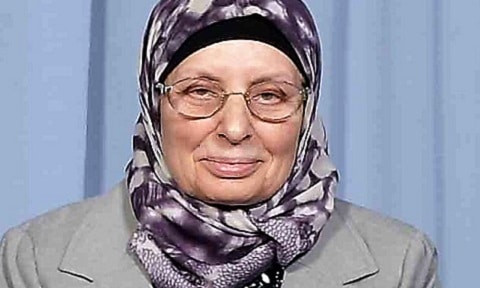 A principal in Sydney, Australia has said her school has never faced the “issue” of homosexuality because children are taught that it is “not recommended.”

Ghazwa Khan (above), the headmaster of Auburn’s Al-Faisal college, said:

“We’ve never had any child who says these things because they are being taught at home how to behave and know that this is not recommended.

“We’ve never had this issue at all, we’ve never had it. I think the students know their limit and they are taught at home what to say and what not to say.”

“This is something that is clearly spelt out in the Koran and the hadith, that sex is only between a husband and a wife who are of the opposite gender and we have absolutely no mandate to change the grace of God.”

TenPlay reports that 40 Islamic schools in Australia have failed to meet government curriculum requirements in music, art, and drama. Some schools have not employed teachers in these subjects while others are quoting the Koran in science class. It was also discovered that “students at some schools have been banned from drawing animals and self-­portraits and are not taught music because some interpretations of the Koran state that only vocal music is allowed and instruments are forbidden.”

According to its website, Al-Faisal college “values the diversity of backgrounds our students and staff bring to learning and teaching. Our highly qualified and dedicated teachers and staff are our greatest assets. We work together with the parents as a team to provide the best possible environment in which young people can adopt values such as tolerance, trustworthiness, respect, courtesy, compassion and kindness to others.”

The government of New South Wales (NSW) has now launched an investigation into Al-Faisal college. Via The Australian:

“Any allegations about a non-government school not complying with these requirements are referred to the Board Of Studies Teaching and Educational Standards for assessment,” a spokesman said. “BOSTES has contacted the school, and is investigating the concerns raised.”

Senator Birmingham said yesterday states should intervene if there is evidence the curriculum is not being followed. “We’ve taken a tough approach to ensure that all non-government schools, including Islamic schools, have to adhere to the high standards of ­financial accountability that the federal government sets,” he said.

“We expect that the states will equally enforce that application of curriculum standards.”

Previous Post: « Tanzania Bans Pro-Gay Charities In Order To ‘Protect’ the Country’s Culture
Next Post: Philippines President Lashes Out at US Ambassador: That ‘Gay’ ‘Son of a Bitch Annoyed Me’ »