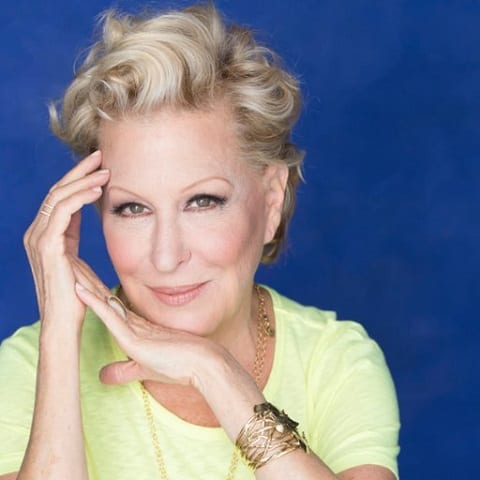 Bette Midler is at the epicenter of a furious tweet storm after taking a dig at Caitlin Jenner on Twitter on Saturday.

Referring to the cancellation of Jenner’s show I Am Cait, Midler tweeted, “Now that @IAmCait has been cancelled, will she go back to being Brice? Will Kris take him back? Do I smell a re-wedding?!” 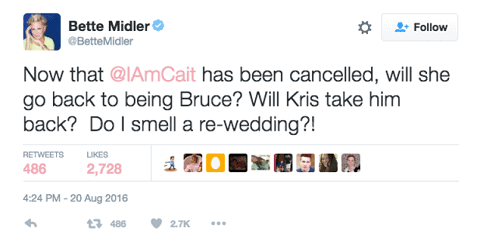 The tweet was quickly deleted but the internet does not forget.

Yes, because being transgender is just a phase? What a vile tweet. Will you go back to being irrelevant?

.@BetteMidler @IAmCait Just shows, you can be as gay-friendly all you want, but to some, transphobia comes so easy. How tired and pathetic.

Some fans came to Midler’s defense.

Midler herself later issued an apology of sorts.

DEAR FRIENDS @HRC, WHOM I HAVE ALWAYS SUPPORTED. SORRY LAST TWEET OFFENDED. AN IDLE MUSING. I SEEM TO HAVE MISREAD THE TEMPER OF THE TIMES.

Some of her followers aren’t buying it though.

I'm not really here for a war. But the wording suggests she doesn't really understand why people were hurt

By "misread the temper of the times," do you mean you thought society at large was transphobic enough to laugh along with you? @BetteMidler

Previous Post: « Tom Daley, JK Rowling, and the ‘Heartbreaking’ Semi-Final Elimination at Rio 2016
Next Post: Broadway Dancer Confesses On Facebook To Murdering His Boyfriend ‘For Love’ »