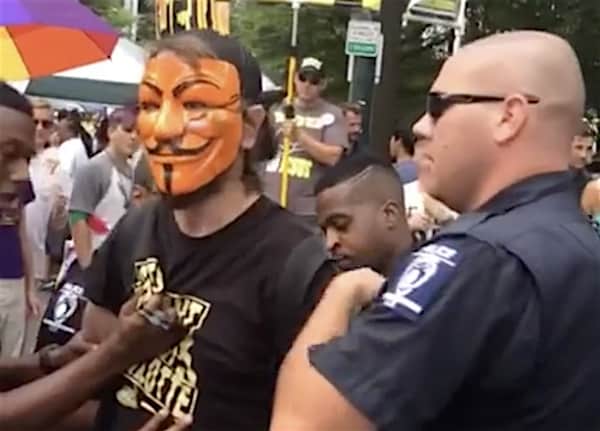 Police arrested two men who were counter-protesting a group of anti-LGBT Bible-thumpers at Charlotte Pride on Saturday. It appeared that the men were arrested for refusing to remove masks.

Q Notes reports that “there is an anti-mask law in North Carolina, prohibiting anyone from wearing them on “public ways”:

Enacted legislation Article 4A of Chapter 14 states that, “No person or persons at least 16 years of age shall, while wearing any mask, hood or device whereby the person, face or voice is disguised as to conceal the identity of the wearer, enter, be or appear upon any lane, walkway, alley, street, road, highway or other public way in this State.”

The law was passed in 1953, in response to Ku Klux Klan members hiding their identities with hoods. Anti-mask laws exists in a number of states.

Occupy protesters, many of whom wore Guy Fawkes masks during protests, were targeted by these laws, as have other protesters.

The American Civil Liberties Union (ACLU) has argued that these laws are unconstitutional, arguing they violate the First Amendment. So far they have held up against legal challenges.

Q Notes also identified the counter-protesters as Michael Behrle and Daniel Gardner and says that they were charged with second degree trespass.

And the anti-LGBT Christian Bible-thumpers in the video above weren’t the only ones trying to disrupt it.

On the flip side, there were more churches participating in the Pride festivities than ever before, the Charlotte Observer reports:

Churches made up more than 10 percent of the 135 contingents in the parade this year, compared to one church that marched in the first parade back in 1994. Some even came with their choirs, driving up parade participation from 2,500 last year to 3,300 this year. Crowds watching the parade were five and six deep in the blocks north of Trade and Tryon streets.

Christina Woodruff attended as a member of Missiongathering Charlotte, which is among the congregations that joined in this year for the first time. The church’s float featured nationally known Christian singer Trey Pearson, who shocked the music industry in June by coming out as gay.

“To those preachers out there screaming the insults, we love you, but stop it,” said Steve Knight of Missiongathering Charlotte.

“Those street preachers screaming hate get so much attention from the media, but there are more churches out here showing their support for LGBT people. You don’t hear enough about us, and we outnumber them.”

Previous Post: « Jaden Smith Prepares to Land a Hot Kiss on a Guy in ‘The Get Down’ – WATCH
Next Post: Ellen Page Stars As LGBT Advocate On and Off Screen: Gay Iconography »