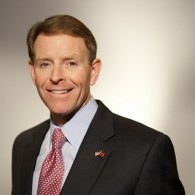 It has been widely reported in recent days that Donald Trump donated $100,000 for flood relief to a Louisiana church which is run by anti-gay activist Tony Perkins (right), the well-remunerated head honcho of hate group the Family Research Council.

On August 20, CNN reported that Trump made the donation to a Greenwell Springs Baptist Church which is working to coordinate volunteers and help victims of the recent floods. Perkins is the church’s interim pastor. On Sunday, the church claimed that Trump was “sending a financial contribution.”

RELATED: Anti-LGBT Extremist Stumped Over Which Bathroom a Transgender Person Should Use: WATCH

Much has been made of the story by publications including The Advocate. However, according to Snopes there is as yet no proof that either Perkins or the FRC benefited in any way from the donation if in fact it has actually been made.

If Trump did, as reported, send a contribution to the church, that doesn’t necessarily benefit Perkins or the Family Research Council directly, though some publications interpreted it as a political statement on LGBT civil rights. While the FRC’s political activity is controversial, as is Perkins himself and the Greenwell Springs Baptist Church’s stance on the LGBT community, it seems the money was intended for flood relief activities. However since we do not currently have documents showing that the donation was made, much less identifying to whom it was made, it is impossible to say exactly where the funds might be going and what they will be used for.

However, Snopes points out that in a Facebook post yesterday, Perkins noted that Franklin Graham‘s The Samaritan’s Purse is organizing relief efforts and using Greenwell Springs Church as its “base of operations.” 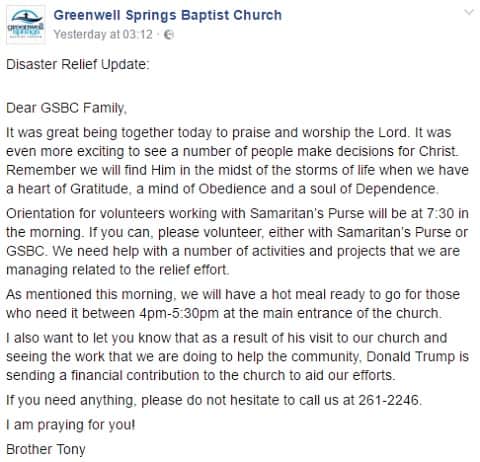 It’s also worth noting that best-for-the-gays Trump continues to court the religious right. Yesterday, he suggested his followers might be interested in homophobe and anti-Semite Ann Coulter’s new book In Trump We Trust.

.@realDonaldTrump Isn't it great that I'm using my political celebrity to hawk crappy books by batshit psycho @AnnCoulter ? I have no pride.