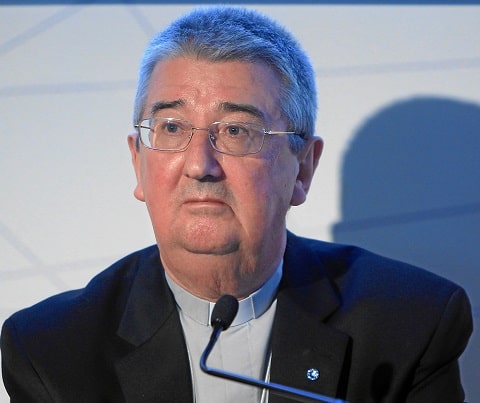 The Catholic Archbishop of Dublin Diarmuid Martin (above) has said he will no longer send trainee priests to a seminary in Maynooth following allegations of an “active gay subculture” at the Kildare college.

Martin’s comments came after anonymous allegations regarding seminarian activities in St Patrick’s College Maynooth, including that many had been using Grindr.

Wonder which Vatican correspondent will dare to ask a Grindr question on next @pontifex plane trip https://t.co/LJyoUoFiWv

Although college authorities said they have “no concrete or credible evidence of the existence of any alleged ‘active gay subculture,’” Martin announced on Monday that seminarians will now be sent to the Irish College in Rome due to “an atmosphere of strange goings-on” in Maynooth.

“It seems like a quarrelsome place with anonymous letters being sent around,” said Martin, a trustee at the college. “I don’t think this is a good place for students,” he added.

Child abuse = Try and draw a veil over it.
Priests using Grindr = THIS MUST BE STOPPED.https://t.co/RRU2mcOf7V

However, the Irish Times reports that the three other archbishop trustees disagree with Martin. Catholic primate Archbishop Éamon Martin, Archbishop of Tuam Michael Neary and Archbishop of Cashel Kieran O’Reilly said they intend to continue sending seminarians to Maynooth as do the bishops of Elphin, Cork and Ross, Down and Connor, Ardagh and Clonmacnoise, Cloyne, Kildare and Leighlin, Clonfert, Clogher, and Killala.

Yesterday, St Patrick’s said it shared Diarmuid Martin’s concerns and encouraged people “with specific concerns to report them appropriately”. The college added that “any student involved or promoting such behavior would be asked to leave the seminary formation programme.”

Father Brendan Hoban, a spokesperson for the Association of Catholic Priests, said this morning:

“I really don’t know what it is that’s happening [or what] Archbishop Martin’s intentions are. The Archbishop has transferred three students; Dublin has 99 parishes, over a million Catholics and only one diocesan priest under 40 years of age. So it seems extraordinary that attention is on moving the deck chairs on the Titanic instead of dealing with the real issues.”

He added that Martin “will damage Maynooth by what he is doing.”