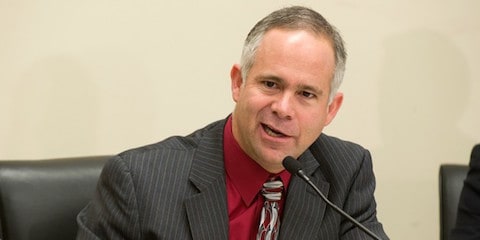 Tim Huelskamp, a Kansas Representative who spent his time in office crusading against gay people, lost his primary on Tuesday to newcomer Roger Marshall.

Huelskamp, a proud supporter of the National Organization for Marriage (NOM) who spoke at its rallies, also pushed a federal marriage amendment that would have imposed a national ban on same-sex marriages.

Huelskamp argued that children would suffer in some unspecific, unquantifiable way; and the founding fathers, “never envisioned a society which would reject a basic understanding of nature.”

He attacked the Supreme Court’s DOMA ruling for the same reason. On the same day that President Obama endorsed marriage equality, Huelskamp amended major funding legislation on the House floor to reaffirm the Defense of Marriage Act.

The loser can try to work full time for NOM now.