LITTLE MEN, now playing in limited release, is the perfect antidote: quiet but insightful, memorable and substantive. It’s not a spectacle by any means but you should still see it inside the movie theater because it’s the kind of careful storytelling that benefits from being fully inside of it. Getting lost in a story is much easier to accomplish in the pages of a great novel or the dark of a movie theater than if you wait around to Netflix and chill.

The movie comes to us from one of our best LGBT directors, Ira Sachs. The New York based writer/director made his feature debut 20 years ago with The Delta (1996) but recently he’s been on quite a roll.

Little Men is not an adaptation of the Louisa May Alcott sequel to Little Women, but it does feel like a rich unexpected sequel to a more contemporary (future) classic. Ira Sachs’s last film was the moving gay seniors drama Love is Strange starring John Lithgow and Alfred Molina whose marriage at the beginning of the film sets off a surprising chain of events which leaves them homeless and at the mercy of friends and relatives.

That beautiful movie ended, rather intuitively, with a wordless and narratively inconsequential scene in which we followed their young nephew on his skateboard down the streets of the city at magic hour. The image was rapturous and watery… or rather just rapturous; I was watching it through cascading tears was all. 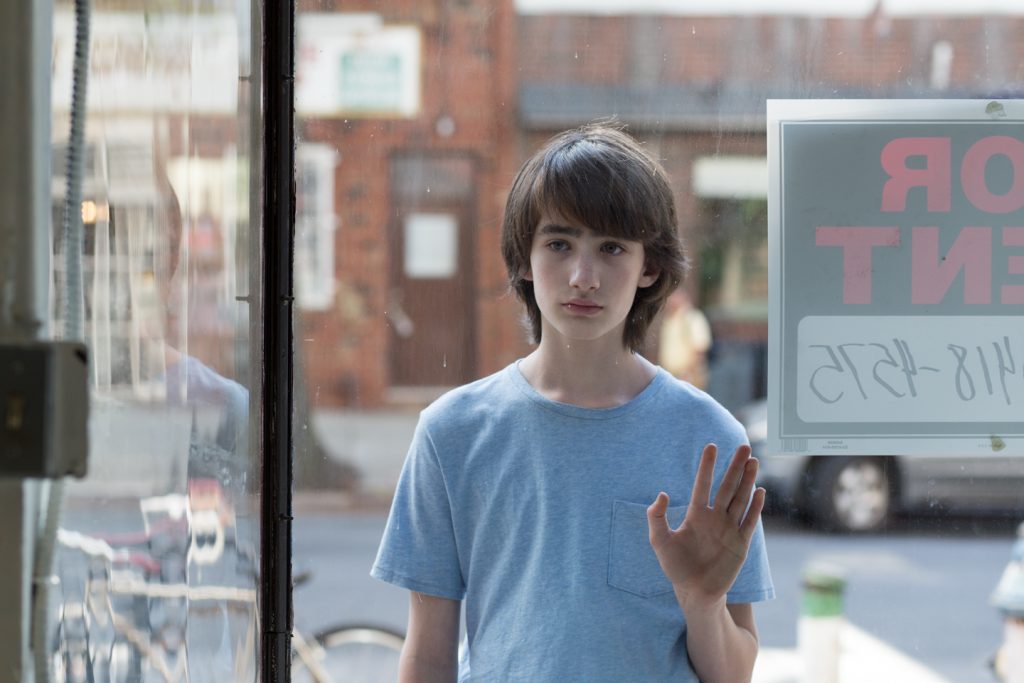 It’s somehow perfect that Sachs followed that coda, at least emotionally, into a whole new movie that revisits the same plot catalyst (real estate and financial troubles disrupting otherwise steady lives) with young boys at the center this time. Jake and Tony (Theo Taplitz and Michael Barbieri, wonderfully natural first time actors) meet when Jake’s parents (Greg Kinnear and Jennifer Ehle) inherit a Brooklyn apartment building that belonged to his grandfather. A tiny storefront below the apartment is the livelihood of Tony’s mom (Paulina Garcia, the brilliant Chilean actress some of you will recognize from the arthouse hit Gloria), who was a longtime friend of the recently deceased.

Jake and Tony hit it off immediately, despite being nothing alike, but their parents are at odds from the start. The wedge between them? Why it’s money of course. The sordid topic of coin.

It’s often alarming when movies talk about finances in any relatable way but surely that’s because the subject remains taboo in entertainment beyond the broadest of strokes. The plot details of Little Men are occasionally maddening, primarily because they feel authentic — you can see social disaster and tense adult standoffs coming but can do nothing to prevent them.

You want nothing more than to see Jake, a sensitive lonely boy (whose parents obviously think is going to be gay  though the subject is not explicitly addressed) and Tony, more of an extrovert guy’s guy, grow up together as unlikely best friends pursuing their dreams; Jake wants to be an artist and Tony an actor, their artistic ambitions their only similarity beyond their age.

Fair warning: the movie is so truthfully observed and sensitive that it’s likely to bring back a flood of emotional memories of your own childhood even if your circumstances were wildly different, especially if you’re a gay man who once had an intense and loyal early adolescent friendship with a straight boy. Or, in fact, if you’re any kind of person who remembers that inexplicably painful sting when young friendships feel threatened by inexplicable (at the time) adult interference.

Little Men wraps up in just an hour and a half, the perfect length for movies and, not coincidentally, the length of a dream cycle. But Little Men is better than dreamy, it’s real. I’ll wrap up quickly, too. If you haven’t yet been fully convinced that Ira Sachs has become of our most important chroniclers of contemporary urban life, run to this third consecutive increasingly persuasive argument to that effect.

After the addiction drama Keep the Lights On (wildly acclaimed by most critics, though I confess I was a holdout), the touching senior citizen romance Love is Strange (raved right here) and this new poignantly observed gem (less explicitly an LGBT film than his other movies, but still beautifully inclusive) it’s safe to say that the New York filmmaker, who recently turned fifty, is in the midst of his peak storytelling years. Do not miss out on them.