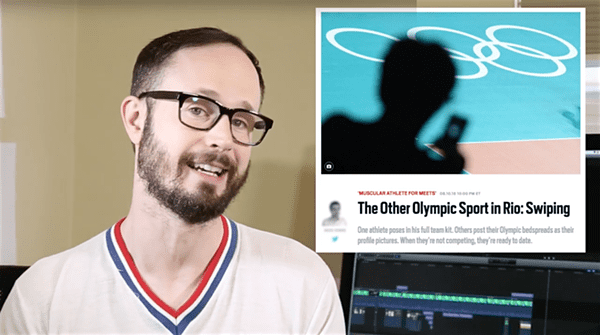 Yesterday, The Daily Beast published an article by straight journalist named Nico Hines in which Hines used Grindr to report on the sexual activities of gay athletes at the Rio Olympics. As we previously reported, that article included explicit details about certain gay athletes who hail from anti-gay countries. In providing enough details to discern the identity of those individuals, Hines effectively outed them and put their lives in danger.

Twenty-fours and several redactions later, Hines has still not spoken out about the article. TDB, however, has taken it down from its site, a move it called unprecedented but necessary.

Vlogger and activist Matt Baume weighed in on the controversy providing some much-needed perspective and sass.

As to why gay athletes using Grindr could at all be considered newsworthy, Baume quipped,

“It may come as a shock, but when we’re not busy being sassy friends, gay people do have sex with each other…So yeah, of course gay people are hooking up in Rio. But whats different about these hook-ups is that at the Olympics there’s a high likelihood that you’ll encounter people that are closeted for their own safety.”

And outing people who are in the closet because they come from a place where it’s illegal to be gay is just plain heinous. Baume explains, “It’s one thing to out a politician who actively harms LGBTs [e.g. Larry Craig] but it’s another to out a volleyball player who could be thrown in jail just for asking someone out for a drink.”

Baume also cautioned against letting your guard down when using gay dating apps like Grindr. “They may feel like a safe space to let your guard down…but they’re not,” he says.

The other tragedy of TDB’s article, besides the endangerment of the lives of gay athletes, is that it could have done some good. But chose not to do so.

“This article could have been about how gay athletes from all over the world may be isolated or face consequences for being out at home but they’re able to connect at the Olympic village. Or it could have talked about the difficulties they’ll face when they return to their home countries. But instead we just got some lurid clickbait.”