The games of the XXXI Olympiad, which people in the Northern Hemisphere refer to as the Rio Summer Games are actually held in the winter for all countries below the equatorial line.

In Brazil, August is the peak of the coldest season of the year. And, even though we’ve had afternoon temperatures averaging 35 C (95 F) with sunny skies and crowded beaches for the last week or so, yesterday it did feel like winter — in Rio terms, anyway.

The low temperature of 16 C (60.8 F) might not sound too extreme to you, but for cariocas (Rio de Janeiro natives) it feels like a Polar Vortex. For the first time since the games started, it felt cold, gray and rainy. For the first time, it really didn’t feel like Rio.

Medalists Tom Daley and his partner Dan Goodfellow weigh in on the green water controversy.

In an video interview with The Guardian, Daley says he has “no idea what the green pool is, other than Shrek has been in the pool and had a bit of a swim,” he jokes. But in fact, he prefers it that way:  “When you are spinning around diving, outdoor diving can be difficult because the sky is blue and the water is blue, so you don’t know which way is up. Now that the water is green, it makes it slightly easier for you to see where you are. For divers, we are kind of fine with the green water,” he says.

The Fédération Internationale de Natation (FINA) released a statement Wednesday explaining that “the reason for the unusual water colour observed during the Rio 2016 diving competitions is that the water tanks ran out some of the chemicals used in the water treatment process. As a result the pH level of the water was outside the usual range, causing the discolouration.”

And after tests conducted by The FINA Sport Medicine Committee on the water quality, it “concluded that there was no risk to the health and safety of the athletes, and no reason for the competition to be affected.”

The games’ third tragic accident happened yesterday during the weightlifting competition: 20-year-old Andranik Karapetyan of Armenia, currently the 77kg European champion, had real chances to medal, but during his second attempt to lift 195 kgs (430 lbs), his elbow gave out and he screamed in pain as he dislocated his joint during the clean and jerk of his lift. 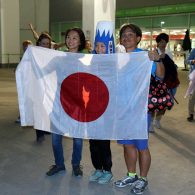 In the men’s gymnastics all around final, Kohei Uchimura proved to be the ultimate king. After leading Japan to win the gold medal on the men’s team final Monday, Uchimura also won gold for the individual all around competition yesterday. It was a very close finish — winning by less than a tenth of the point. Ukranian Oleg Verniaiev took the silver and Max Whitlock, of Great Britain got the bronze.

Kohei Uchimura wins #Gold for #JPN in the All-Around in stunning fashion. pic.twitter.com/bf3ugnBsRF

The gymnastics apparatus finals start on Sunday, and for three days, both male and female athletes will compete individually on each apparatus. One notable absence will be Dutch Gymnast Yuri van Gelder, also known as “Lord of the Rings.”

Maurits Hendriksthe, Dutch team’s ambassador,  confirmed that the 2005 rings world champion and a strong medal contender for Rio, was thrown out of the Olympics for partying too much. On Saturday night van Gelder went out to have a little fun and only returned home on Sunday morning after having consumed alcohol — a violation of the Dutch team living conditions during the Olympics.

“It’s terrible for Yuri, but this kind of behaviour is unacceptable,” Hendriks said in a statement Tuesday. “In sports terms this is a disaster, but we had no other choice given the violation of our values.”

The Guardian noted that this was not the first time for the “Lord of the Rings.” In 2009, he was suspended from the Dutch Gymnastics Union for using cocaine three days before the national championships. Damn!

The país do futebol (soccer’s country) finally scored a goal in the tournament — the last of the 16 teams playing to do so. Or better yet, the seleção scored four goals against Denmark. Brazilians can breathe again.

Here’s a look at the host country’s newest devils-turned-saints:

Another Soccer Shocker: Argentina men’s team (gold medalists in 2004 and 2008) failed to advance, after getting eliminated by Honduras. Reuters explains that Honduras claimed the second qualifying spot by virtue of a superior goal difference over Argentina, who missed a penalty in their match, with both sides finishing on four points.

#HON manages to reach quarterfinals in #soccer, #ARG out and will not be in medal contention. #Rio2016 https://t.co/ADs4kGQRNb

Katie Ledecky won another gold medal on the women’s 4×200 freestyle relay, but you had probably already guessed that. Australia took the silver and Canada the bronze.