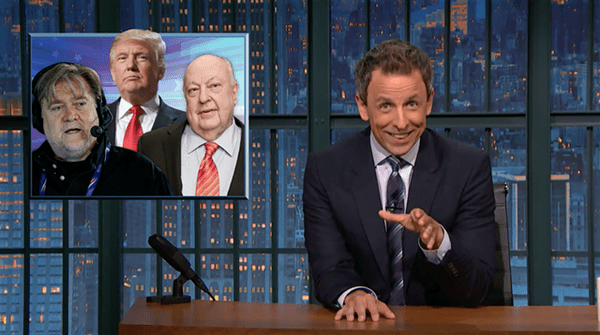 On Monday night, Seth Meyers dug into the staff shake-ups within the Donald Trump campaign and went after Trump’s new campaign CEO, Steve Bannon, and his new adviser and debate prep-er in chief, Roger Ailes.

Said Meyers of Trump’s new team, “I actually think this new Trump inner circle makes perfect sense. Trump is surrounding himself with the very people who created the right-wing media bubble—a bubble built on paranoia, conspiracy theories, and white identity politics which allowed Trump to thrive in the first place.”

Talking about former Breitbart News editor Bannon, Meyers pointed out that he has “run headlines, among other things, accusing President Obama of shedding ‘phony fascist tears’ and calling a conservative Trump critic a ‘renegade Jew.'” He added,

“And then there was this classic Breitbart headline: ‘Birth Control Makes Women Unattractive and Crazy,’ and if anyone should be the judge of who’s unattractive and crazy, it’s pin-up model Steve Bannon. He looks like Jabba the Hutt’s deadbeat son.”

As for Ailes, Meyers quipped,

“Then there’s former Fox News chairman and current Jabba the Hutt Roger Ailes, who was forced out after an alleged pattern of sexual harassment and is reportedly advising Trump,” Meyers continued. “Ailes essentially shaped the modern conservative movement, so it’s no surprise that Trump is now using many of Ailes’s tactics.”

Meyers also joked about Trump counsel Michael Cohen who became a viral sensation after denying that Donald Trump was being schlonged by Hillary Clinton with his now infamous line “Says who?”:

“‘Says who’ isn’t just a dumb Trump supporter’s response to a few polls, it’s the right’s reaction to everything—from climate change to unemployment numbers to healthcare. ‘Says who’ is the product of decades of work by Ailes and others to dismiss facts that don’t align with their worldview,” offered Meyers. “And now, with members of the alt-right conservative media advising Trump, they’ve latched on to yet another conspiracy theory: this time questioning Hillary Clinton’s physical health, despite zero evidence and repeated assurances from her doctor that she’s fit to serve as president.”

Previous Post: « Insane Couple Climbs to the Top of the Highest Crane in the World: WATCH
Next Post: What is Nick Denton Doing After Gawker? »