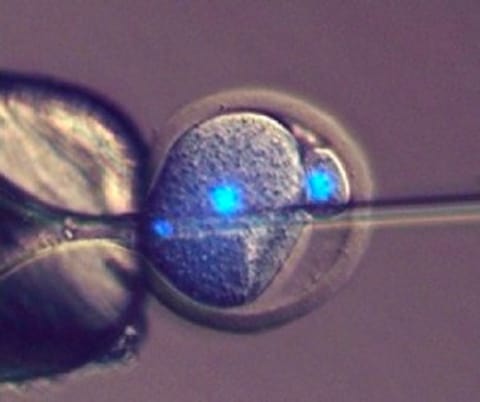 New research has opened the door to the possibility that gay men could one day soon have children using just sperm with no need for a female donor egg. In a stunning breakthrough, scientists have created embryos from non-egg cells in mice, and believe they could recreate the process one day in other species.

There are two types of cell: “meiotic” reproductive cells (eggs and sperm), and “mitotic” cells which include most of the tissues and organs in our bodies.

Mammal reproduction requires a sperm and egg to fuse, creating an embryo. But instead of using a meiotic egg cell to produce their mouse pups, the researchers used a type of mitotic cell called a parthenogenote. These are very early-stage, single-celled embryos that form without fertilisation — in this case by chemically activating a mouse egg.

Just before the parthenogenotes divided into two cells, they were injected with sperm nuclei to fertilise them. The resulting pups’ survival rate was a quarter that of other mice. Though these are early days, the feat suggested that other types of mitotic cell, such as skin cells, may one day be used to create offspring.

This could open up the possibility for gay men, older women or infertile couples to have children with both parents’ DNA.

The research was undertaken by scientists from the Department of Biology & Biochemistry at the University of Bath, in England:

Molecular embryologist Dr Tony Perry, senior author of the study, said: “This is first time that full term development has been achieved by injecting sperm into embryos.

“It had been thought that only an egg cell was capable of reprogramming sperm to allow embryonic development to take place.

“Our work challenges the dogma, held since early embryologists first observed mammalian eggs around 1827 and observed fertilisation 50 years later, that only an egg cell fertilised with a sperm cell can result in a live mammalian birth.”

The idea was the brain child of Dr Toru Suzuki in Dr Perry’s team in the University of Bath’s Laboratory of Mammalian Molecular Embryology, who performed the study together with team member Dr Maki Asami and colleagues from the University of Regensburg and the Fraunhofer Institute for Toxicology and Experimental Medicine in Germany.

The baby mice born as a result of the technique seem completely healthy, but their DNA started out with different epigenetic marks compared with normal fertilisation.  This suggests that different epigenetic pathways can lead to the same developmental destination, something not previously shown.

The discovery has ethical implications for recent suggestions that human parthenogenotes could be used as a source of embryonic stem cells because they were considered inviable. It also hints that in the long-term future it could be possible to breed animals using non-egg cells and sperm. Although this is still only an idea, it could have potential future applications in human fertility treatment and for breeding endangered species.