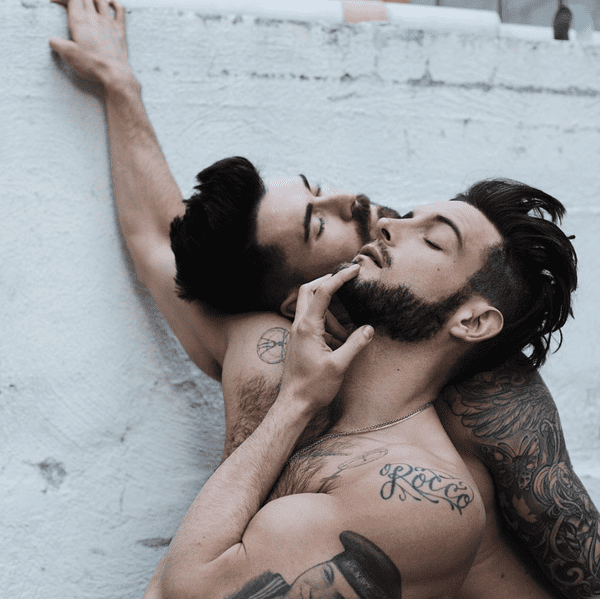 Actor Nico Tortorella and hairstylist/Instastud Kyle Krieger open up about their relationship in a new episode of Tortorella’s podcast, The Love Bomb.

Tortorella, who stars on the TV series Younger (which had its season premiere last night), opens the podcast by declaring that “gay is normal, gay is love, and anybody who thinks otherwise can go f*ck themselves.” However, Tortorella does not identify as gay. He’s sexually fluid, meaning he occasionally dates boys.

In Tortorella’s “conversation with a man I love named Kyle,” Tortorella and Krieger talk publicly for the first time about their relationship. They discuss how they met on Instagram, became pen pals of sorts, and then began a 6 month romantic affair.

Kriegers says that his relationship with Tortorella was the first time he had experienced love in a long while. “I was just worried that those feelings had disappeared for me,” he says.

And though the two are no longer together, they remain close.

Krieger talked about the podcast on his Instagram, writing,

After our breakup I wanted to just hide forever but @nicotortorella asked me to be on his Podcast #TheLoveBomb so I did. It was a healing experience to say the least. We talked about so much.. social media, character flaws, insecurity, dating, falling in and out of love, sex, sobriety, and a lot of other things I never thought I’d say publicly.

As for Tortorella’s sexuality, he told Elle magazine:

Look, a lot of people don’t think that the way that I live my life is a real thing, that it exists, that having a broad spectrum of sexual orientation is even possible. I get told all the time on social media. God forbid you open up a Reddit article. But it comes with it, you know? I’m not trying to redefine sexuality or humanity or say that my answer is right and yours is wrong. I’m just happy with who I am. I am driven by love and I have been in love with a handful of different people, men and women. It’s like, if you go to a bookstore and you know exactly what kind of book you want, you have to look it up in the system because it’s in a specific section of the bookstore. I fit into a handful of sections in the bookstore.

RELATED: Nico Tortorella Speaks Out About Reaction to News of His Sexual ‘Fluidity’

Listen to Tortorella and Krieger talk about their relationship, below.

And check out some more Instagrams the pair have shared.