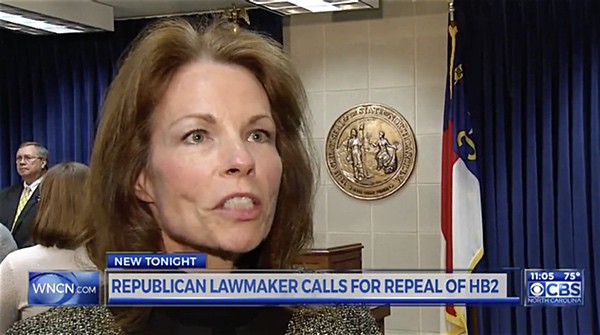 Republican State Senator Tamara Barringer, who voted for North Carolina’s anti-LGBT HB2, is now calling for its repeal because her re-election poll numbers are diving.

The desperate shift has been called “purely political” by her opponent, Democrat Susan Evans.

Said Barringer: “I did not realize the consequences of this bill, that it would have worldwide consequences, and they just keep piling up. So, at this point, I’m willing to stand up and say, ‘Let’s put the brakes on it. Let’s get together and find a common solution that we call can live with and move forward.'”

Barringer’s flip-flop comes after the NCAA said it would be moving all of its championship games out of North Carolina for the 2016-17 season. The NBA has also moved its 2017 All Star Game out of Charlotte. This on top of millions, perhaps billions in business losses for the state over the bigoted law which was passed by Republicans in a rushed special session last April.

RELATED: Hillary Clinton: ‘The NCAA is Right to Pull Games from North Carolina’ Over Anti-LGBT HB2

“When she voted for HB2 in March, Sen. Barringer knew what she was doing,” Ingalls said. “She knew the legal and economic consequences her constituents would experience. Only now that she’s in danger of losing her seat does she waffle. Her latest change of mind is certainly not a change of heart. It’s a purely political move designed to make voters forget that she is responsible for the loss of jobs and millions of dollars in economic investment in her district.”

No other Republican lawmaker in the state has publicly called for a full repeal of House Bill 2. But many legislators didn’t return calls and emails seeking comment on Tuesday, including other Wake County Republicans up for re-election in November: Sen. Chad Barefoot, Sen. John Alexander, Rep. Marilyn Avila, Rep. Nelson Dollar, Rep. Chris Malone and Rep. Gary Pendleton.

Watch a report on Barringer’s flip-flop from WNCN:

Previous Post: « 53 GOP Lawmakers in Tennessee Have Nothing Better to Do Than Try to Intervene in a Gay Couple’s Divorce
Next Post: 69-Year-Old Woman Punched in Face by Trump Supporter Speaks Out as Assault Aftermath Video Emerges: WATCH »