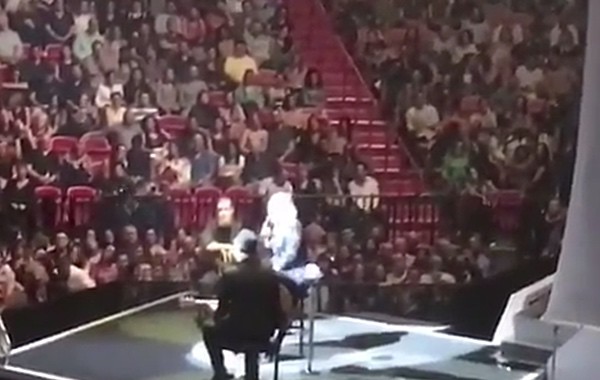 Though as a Brit she can’t vote in the US election, Adele gave a full-throated endorsement of Hillary Clinton at her Miami concert, at which Clinton was in attendance.

“Don’t vote for him,” Adele told her audience at the American Airlines Arena, referring to Donald Trump.

She added: “I am English, but what happens in America affects me too…I am 100 percent for Hillary Clinton. I love her, she’s amazing.”

The endorsement received shrieks of approval from the crowd.

It was a great birthday present for Clinton, who turns 69 today.

Adele with Hillary Clinton in attendance at Miami concert: "Don't vote for him!" @AAarena #Adele (via Aaron Resnick) pic.twitter.com/cAJCokgSvW