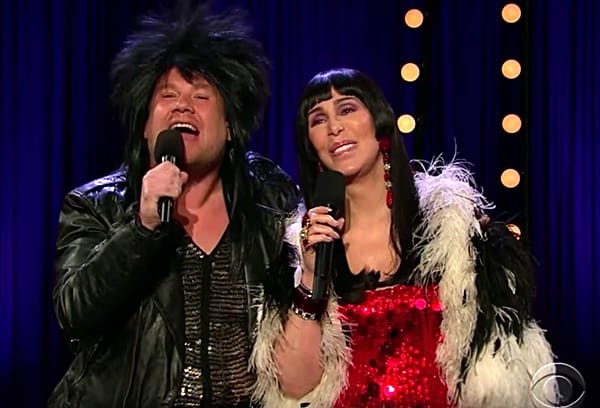 Cher joined Cher (James Corden) on The Late Late Show last night for an updated version of her 1965 classic, “I Got You Babe”, which, of course, has been updated as “I Got You BAE”.

Cher has been making the rounds to promote an upcoming residency in Las Vegas and sat down earlier this week to talk about her political activism with the TODAY show.

Cher, who appeared over the summer at several fundraising events for Hillary Clinton in South Beach, Fire Island, and Provincetown, said the thought of a Trump presidency scares her to death:

“She’s done some things that I’m sure she wishes she hadn’t done. And she’s done things — I can’t back every play. But I think that if she has the chance to be a great president, she will rise to that occasion.”

And she had some poignant things to say about aging (she’s 70 years young) and continuing to tour.

“I just don’t know how to accept it. I don’t want to either. But I don’t really know how to. I look in the mirror and I see this old lady looking back at me. I have no idea how she got there. If I put 70 candles on my cake I would blow my brains out…”

Of touring, she confesses: “The older you are the harder it is.”

Though it doesn’t seem to show.

Previous Post: « Bad Hombre Cologne: For Those Times When Just Acting Like a Dick Isn’t Enough
Next Post: Oprah to Undecideds: ‘You Don’t Have to Like’ Hillary Clinton, But There’s Only One Choice – WATCH »