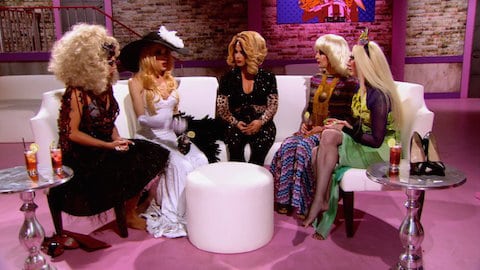 Gather round, chickadees, because we have a lot to discuss after last night’s RuPaul’s Drag Race All Stars. Last night’s “Bring Your Family To Werk Day” themed episode started heartwarming, but it took a bitter, bitter turn.

Get ready to gag on the return of Drag Race’s most notorious girl gang, and find out who failed to duckwalk their way into the final four.

As a reminder, this is a BYOP party, bring your own pitchforks, henny. You’re gonna need them.

Things start in the workroom, where Alaska quickly tries to dispel rumors of a RoLaskaTox uprising. No, no, Alaska assures the room. She didn’t save Roxxxy over Tati last week because we’re in cahoots; she did it because Tati wasn’t here for a few weeks, so who knows how she would have fared.

Fair enough (even though, as I pointed out last week, if Tati had been in the bottom two both of the weeks she was absent, she would still only tie Roxxxy in the amount of times in the bottom AND she would have one more win). But, for the sake of argument, let’s just say Alaska was being honest. The reasoning mostly holds up. Katya, bless her, reveals she would have sent Roxxxy home. And rightfully so.

Ru enters to let the ladies know that this week will be makeover week, and it’s going to be a family affair. Mama Ru has invited the moms and sisters of the remaining queens to come be transformed. The pairs will be judged on family resemblance and a special vogue performance. How fun!

Katya’s mom is an adorable little lady. She’s so adorable, she even makes that grating “Bahstan” accent charming.

Alaska’s mom prompts this season’s frontrunner to confess his struggles with substance abuse.

Alyssa and his sister discuss the death of their mother a year ago, while Detox and his sister talk about the recent anniversary of their father’s passing. Roxxxy’s mom (technically her grandmother, but she is the woman who raised Roxxxy) is probably the most likable thing about Roxxxy we’ve seen so far. She even showed up in her own homemade t-shirt.

But I also want more Aubrey Plaza, this week’s guest judge. In fact, I vote that we send Todrick Hall home and keep Aubrey forever. She’s snappy and clever, but a totally different vibe than Michelle and Carson.

The resulting runway is a lot of fun. Katya and her mom are wonderful, and play to Katya’s campy strengths. Her mom played an actual Russian peasant mother while still serving glamour, and it was great. A real hammer and SICKENING routine. Detox also turned it way up with her sister, going for outrageous artistry like only she can. Alyssa and Roxxxy produced cute, middling routines, but it was our leading lady Alaska that really stumbled.

This led to ‘Laska throwing an all out hissy fit backstage, which was really unattractive. For a competitor that’s been cool as a cucumber the entire competition, it was shocking to see her completely unravel like this. She even (jokingly?) offered Detox $10k to stay in the competition.

Alyssa makes the case that clearly Alaska has been killing it, and it’s only Ms. Edwards second time in the bottom, so the choice should be obvious, right? RIGHT?

Somehow, Roxxxy feels like her safe performance this week cancels out the last few weeks of falling in the bottom.

The queens lip sync, and Detox just kills it. She wisely changed into a new outfit and a perfect Dr. Seuss-esque wig, and she just goes for it. Even the one, well-timed jaw quiver was masterfully deployed. She takes the win and sends home … ALYSSA?! Even Ru gasps in horror.

I guess this really is RuPaul’s Best Friend Race.

As Alaska points out in next week’s preview, this is a repeat of the season five closer: RoLaskaTox and a lovable weirdo are all that remain going into next week’s finale. Let’s size up the competition in our rankings, below.

1. Despite some truly off-putting behavior in tonight’s episode, the season still belongs to Alaska. A win for anyone else at this point just doesn’t feel earned. Even though I think her performance this week was underwhelming, she outpaced the other queens by such a comfortable distance in the preceding episodes that I still think she deserves the crown.

2. I’m loving this more focused Katya. I like that she knows her brand of humor and doesn’t second-guess making some bold choices. Her commercial last week was strong, and I loved the story she told on the runway with her mom. It’s good to see her feeling emboldened to stand up to RoLaskaTox instead of letting that get to her.

3. Well, I guess the top three is sured up now, and it’s Detox snagging the third spot. (Though it’s unclear if a winner will be chosen from the top four or if we’ll whittle down the remaining girls any further first). It goes without saying that I think Detox deserves the spot more than Roxxxy, but I’m not sure she can shake the savvy top two competitors.

4. Alyssa. Yeah, I said it. Her work last night was at least on par with Roxxxy, if not better, and her work throughout the competition far surpassed Roxxxy’s output. In the end, Alyssa is a star, regardless, and for sure one of the all-time favorites in the hearts of fans. She’ll be fine.

5. Roxxxy with her mom was the most endearing version of Ms. Andrews I’ve seen yet. But Roxxxy’s stubborn refusal to acknowledge that, yeah, it was her time to go sent her right back to the bottom of my list. She’s a competent, skilled queen that I just find utterly unlikable. She’s got skill, but she’s just not a star. #sorryboutit