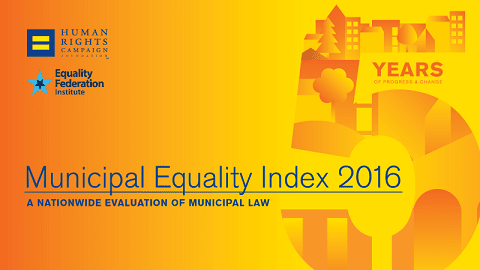 The Municipal Equality Index looked at 506 cities including the 50 state capitals, the 200 largest cities, the five largest cities in each state and cities home to a state’s two largest public universities.

Cities are ranked based on inclusive laws and nondiscrimination policies in areas including housing, employment, public accommodations and access to services.

For the third-consecutive year, we've received a perfect score on the @HRC Municipal Equality Index. pic.twitter.com/06DhEcnZqR

According to HRC, the number of cities with perfect scores has increased from just 11 in 2012.

The report also found evidence of significant progress on transgender equality, noting that “Transgender-inclusive healthcare benefits are offered to employees of 86 municipalities this year – up from 66 in 2015 and 5 in 2012 – and the growth of cities offering those benefits to their employees outpaces the growth in the number of cities rated.” 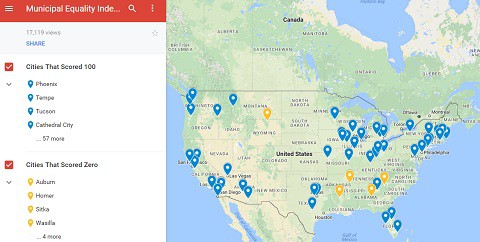 Other key findings of the survey are:

Cities continue to excel even in the absence of state laws: 37 “All Star” cities in states lacking comprehensive non-discrimination laws scored above 85 points, up from 31 last year, 15 in 2014, eight in 2013, and just two in 2012.

Cities with a higher proportion of same-sex couples, as tabulated by a UCLA Williams Institute analysis of the 2010 U.S. Census, tended to score better. The presence of openly-LGBTQ city officials was also correlated with higher scores.

“This year, dozens of cities across the nation showed they are willing to stand up for LGBTQ people in their communities even when state governments are not. This builds on a trend we have long observed: that local governments are at the forefront of our fight for equality. Unfortunately, our opponents have witnessed this progress too, and in recent years, anti-LGBTQ lawmakers have pushed spiteful legislation aimed at pre-empting local protections. That’s why it’s so important that we continue to not only fight for equality at the state and local levels, but to enact comprehensive federal protections for LGBTQ people under the Equality Act.”

New York Mayor Mayor Bill de Blasio added that the city “prides itself on being an inclusive city for all, regardless of who they love or how they identify.”

You can check your city’s score here.

Previous Post: « Cher Blasts Trump on ‘Today’ Show: ‘I Feel Like I’m Yelling ‘Fire’ and No One is Listening’
Next Post: 8 Alabama Counties Still Refusing to Issue Any Marriage Licenses Because Gay Marriage »