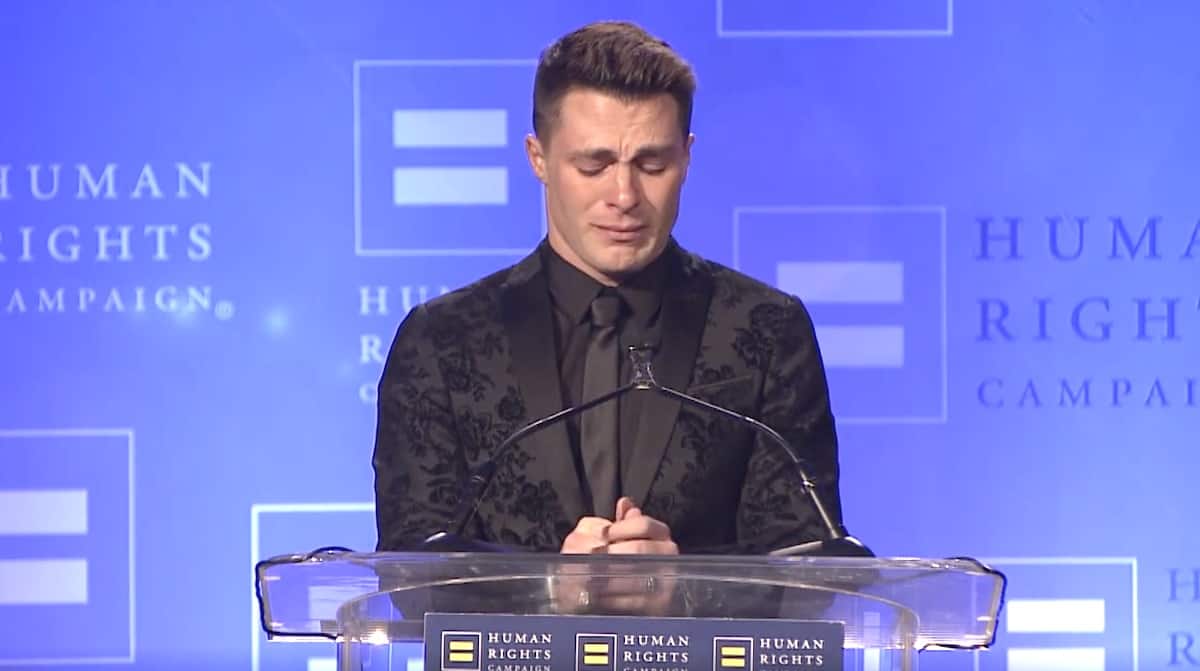 Actor Colton Haynes, who came out of the closet just this past May, received the Human Rights Campaign Visibility Award at a gala in Seattle over the weekend. Haynes was emotional throughout his acceptance speech, fighting back tears as he talked about the freedom he has now to be himself.

“I never made a decision to be gay,” said Haynes. “That came just as naturally as the color of my eyes. But, however, it’s up to me to be honest and open with everyone. And that’s why I’m here tonight, and why it’s so special for me.”

He added: “I’m asked to play so many roles as an actor. But tonight I can actually be myself for the first time. It feels incredible.”

Haynes said he planned to pay it forward:

“I don’t necessarily feel especially deserving of this recognition. We all know there are many other people who have come before me and blazed the trail as LGBT advocates and as role models. And I’m walking in their shoes and I’m following their lead. Instead I’ll accept this award as a promise. And this promise is simple and real. And I’m not making it to you. I’m making it to the next generations of lesbians and gay men, bisexuals, and transgender youth, and I hope my example will give them the confidence and hope to be who they are as well. And for them to conquer their own fears and hesitations. I want to give them just a little more courage to know that they’re loved just as they are.”

He also shared some personal thoughts. He grew up in Kansas and Hot Springs, Arkansas, he is “obsessed with clouds” and was going to be a meteorologist instead of an actor.

“I have many hopes for the future, and many ambitions as an actor and an artist. On a personal note, I have to confess that I also want to raise kids of my own, eventually, maybe half a dozen. Maybe have a basketball team or something like that, but I would love to not raise them alone.”

Itay Hod at The Wrap asks whether Haynes should be the recipient of an award just for coming out?

For years, the Human Rights Campaign, the nation’s largest LGBT advocacy group, has presented its Visibility Award to high-profile, positive role models. But the decision to give the award to recently out actor Colton Haynes strikes some activists as premature.

Seeing celebrities come out sends a powerful message to other LGBT people  — especially teens who may feel isolated and alone — that they are part of a community and shared struggle. The question for some activists is whether, in the age of legal same-sex marriage and other advances, coming out should be viewed as something worthy of an award, or as a basic responsibility. They argue that we no longer live in a time when celebrities need to hide their sexuality for fear of career repercussions.

Hod grilled activists, publicists, past HRC members, and other out celebs on whether this kind of award should be given to a newly-out celeb like Haynes, and most agree that large lobbying organizations such as the Human Rights Campaign use celebs – especially those with a vast social media reach like Haynes – as a tool to fundraise and raise awareness at the same time:

“Attaching a celebrity to the awards gets more eyeballs and attention to the topic,” Scott Martin, who was an active member of HRC Seattle for years, told TheWrap. “It gets more people to talk about it and tweet about it. Colton’s peers, who may still be in the closet, may see the embrace Colton gets and perhaps be inspired to do the same.”

“It’s not about the award,” celebrity blogger and activist Perez Hilton told TheWrap. “It’s about Colton giving of his time and allowing HRC to use his name and likeness to sell tickets and fundraise. He’s directly doing good for the entire LGBT community by agreeing to accept this ‘award.’ They call it an award but it’s really an arrangement. ‘This is how you can help us!’ I’m glad he said yes!”