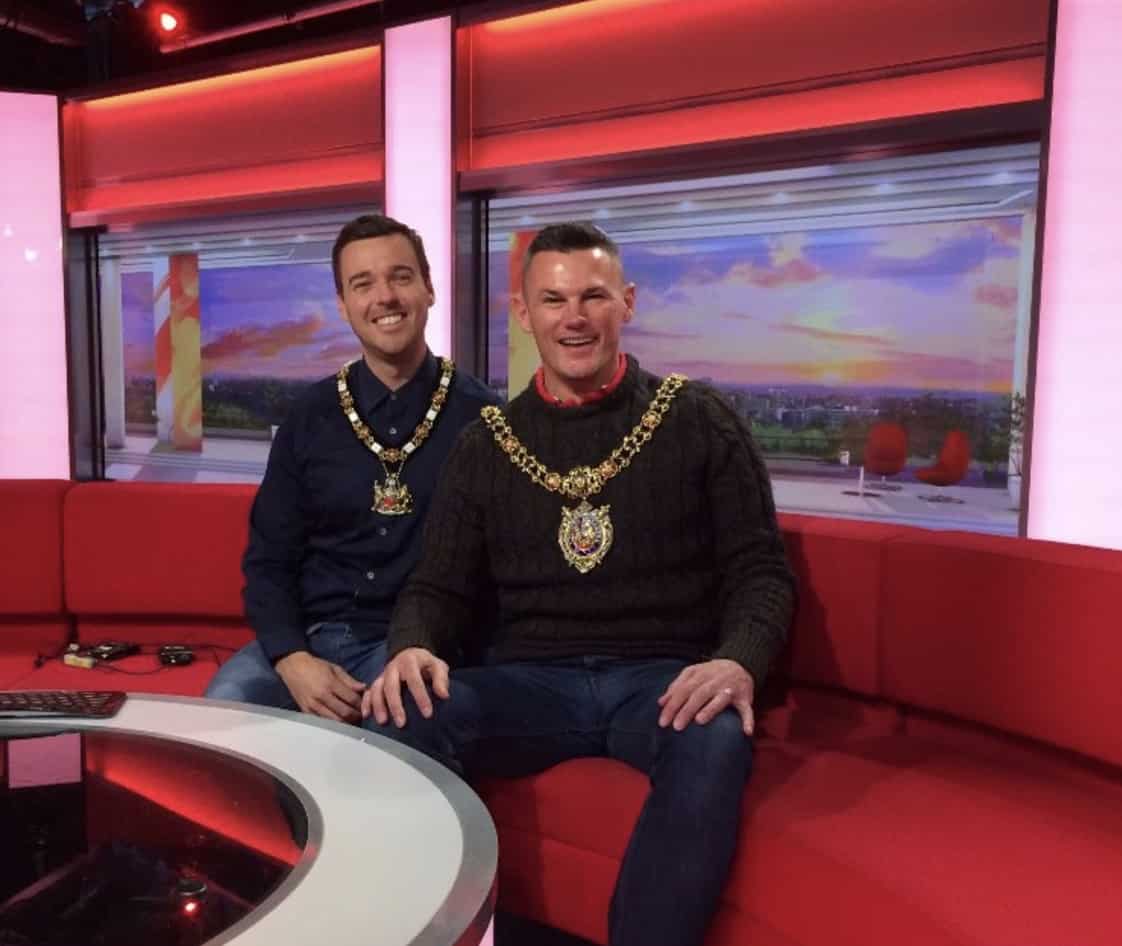 Carl Austin-Behan, the Lord Mayor of Manchester, UK (above, with his husband, Simon Austin-Behan), says he was the victim of an anti-gay hate crime at a Justin Bieber concert on Sunday night.

Austin-Behan, a former Mr. Gay UK who was dismissed from the Royal Air Force in 1997 because of his sexual orientation, said that he was called a “dirty faggot and a dirty gay” by two women ages 16 and 21, the Manchester Evening News reports.

Austin-Behan tweeted photos of the women shortly after the incident:

Just met 2 ladies who think it's right to be homophobic at a Justin Bieber concert calling me a dirty fagot and a dirty gay @GMPCC @gmpolice pic.twitter.com/YuqrggjCnl

Austin-Behan, who was sworn in as lord mayor in May, said he was walking to the arena and saw the two girls arguing with a ticket tout when one of them allegedly said: “I’m not paying that to see a dirty gay.”

He added: “As I walked past them I thought ‘I’m not happy with that’ so I turned round and said: ‘Do you think that’s appropriate, in this day and age?’ That’s when the barrage of comments came back [saying] ‘Am I gay? Am I gay? Am I a dirty faggot?’ and all that sort of stuff that started coming out.

“I was annoyed. I wasn’t shaken up, I was annoyed. Because it was a Justin Bieber concert there was a lot of young people there, and it was a mix of people. I was more annoyed that people could go to a gig like that and feel they could get away with saying things like that.”

Austin-Behan added that one of his goals as Lord Mayor has been to highlight the need to report hate crimes:

“I’m quite a strong person, I can take that. But if people are still saying those things about someone’s sexuality, I find that really offensive and hurtful. It’s important that we stand our ground and that we demand the respect we should get. It may seem trivial to some people, a bit of name-calling, but it’s highly offensive.”

In other news, Bieber made headlines at the same concert for having a temper tantrum and storming off stage after throwing his microphone:

In a video that appears to have been taken after Bieber returned to the stage, the star says he wanted to connect with the audience. From the sounds of it, he walked off after once again growing frustrated with people in the crowd screaming while he was trying to talk.

“My point of the no screaming thing is so that when I’m looking at you in the eyes, you can actually know that we’re having a moment and having a connection,” he says in the clip. “So it’s not me trying to be an asshole.”

Previous Post: « Lizzie Velasquez Has Something to Teach Us About True Beauty: WATCH
Next Post: John Oliver Looks for the Root of America’s Addiction to Painkillers: WATCH »