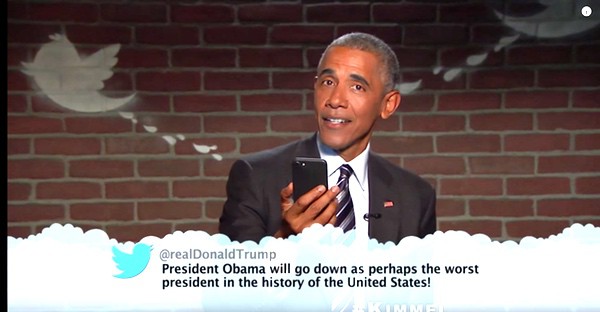 “Obama is the Nickleback of presidents”

Barack Obama… bro, do you even lift!?”

“President Obama will go down as perhaps the worst president in the history of the United States!”

Replied the President: “Really? Well, @realDonaldTrump, at least I will go down as a president.”

Obama also sat down for an interview on a variety of topics.

He says he won’t be going through a metal detector, EVER:

He said he’s rooting for the Cubs in the World Series even though he’s a White Sox fan:

He told Kimmel that after reading about it in the news, he asked Malia about Snapchat, and ended up getting trolled by her. He’s unfortunately crippled by a disabled phone (no email, no camera, no music) although there is updated WiFi at the White House. He also talked about Friday’s cyber attack that went after huge sites like Netflix, Soundcloud, Twitter and others by using connected devices to launch a DDoS assault.

He talked about Hillary Clinton and why some people don’t trust her. Obama says it is because she has been in the public arena for years.

“She’s smart as a whip, she does her homework, she works really hard, she cares deeply about working families in this country, and she’s not somebody who thinks the job is about flash and sizzle and making speeches, just getting policy right and making sure that folks are doing a little bit better.”

“At a time in our politics where everybody wants to get 100 percent of what they want right now, and the assumption is if someone else doesn’t agree with you then they’re completely wrong and we got no time for them….the brand of politics that Hillary represents that is pragmatic – you make progress in little pieces at a time – that may not attract as much attention, it’s not something that goes in 140 characters as easily, but I think she’ll be an outstanding president.”

He says FLOTUS would divorce him if he ran again and why he’s staying in D.C. when his term is over. He also says, to the audience’s disappointment, that Michelle has to leave the White House too.

“If I were able to run for a third term, Michelle would divorce me.”

Finally, the cheeto-colored fascist who is running for president came up. Obama says he laughs at him during debates “most of the time.”

He wants to make sure everybody votes:

Obama also said that he is enjoying campaigning on Hillary’s behalf and for Senate and House candidates.

“We joke about Donald Trump but….there is something qualitatively different about how Trump has operated in the political sphere…what we haven’t seen before is somebody questioning the integrity of elections and the will of the people. What we haven’t seen before is a politics based on putting down – in very explicit terms – Muslim Americans, who are patriots, or describing women – not interms of their intellect or their character but on a 1 to 10 score. There is a certain responsibility and expectation…if you are willing to say anything or do anything even if it undermines everything that is built by previous generations, then that’s a problem.”