The Vatican denounced a right-wing Catholic radio station on Friday for blaming the recent earthquakes in Italy on the country’s passage of civil unions for gay couples. 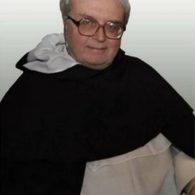 In a statement on its website, the station, Radio Maria, said it had suspended Father Giovanni Cavalcoli (right), the announcer who had made the remarks.

This is the moment a dog was rescued from the rubble of the earthquake in Italy where it could have been trapped for days pic.twitter.com/phsJheCPbb

Cavalcoli had said that the earthquakes were “God’s punishment” for the sins of man which included the same-sex civil unions passed in May, the BBC reports:

But the Vatican rejected the remarks as pagan, and said they had nothing to do with Catholic theology.

“They are offensive statements for believers and scandalous for those who do not believe”, said Monsignor Angelo Becciu, deputy secretary of state, who is close to Pope Francis.

Monsignor Becciu said Radio Maria, which has come under criticism in the past for comments seen as anti-Semitic, had to “moderate the tone of its language” and conform to the Church’s message of mercy. But the friar at the centre of the scandal stood by his description of the quakes as divine intervention.

Previous Post: « ‘Doctor Strange’ Is Both Trippy and Mundane – REVIEW
Next Post: Obama to Bill Maher: ‘A Vote for Trump…Will Be Badly Damaging for This Country’ – WATCH »