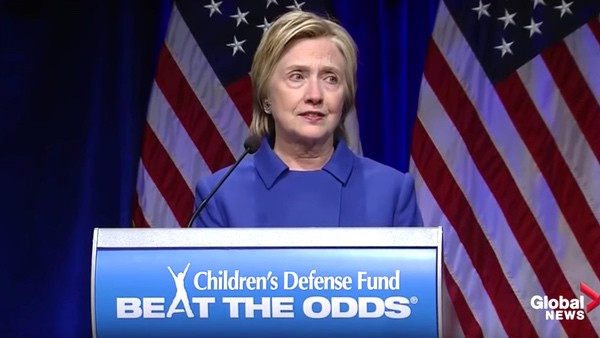 Hillary Clinton spoke for the first time last night since her loss in the US election. Her speech to the Children’s Defense Fund, where she started her career as an intern, was scheduled before her electoral loss to Donald Trump.

She told the audience that the last week has been a challenge:

“I will admit coming here tonight wasn’t the easiest thing for me. There have been a few times this past week when all I’ve wanted to do was just to curl up with a good book or our dogs and never leave the house ever again.”

Clinton reflected on the election:

“I know that over the past week a lot of people have asked themselves whether America is the country we thought it was. The divisions laid bare by this election run deep. But, please, listen to me when I say this: America is worth it. Our children are worth it. Believe in our country and fight for our values and never, ever give up….The words of Dr King, often repeated by President Obama: ‘The arc of the moral universe is long but it bends toward justice.’ I know sometimes it can feel awfully long – believe me, I know. But I also know it does bend.”

Clinton choked up as she recalled her mother Dorothy Rodhams’s return to Chicago after being sent to California with her sister to live with her abusive grandparents:

“I dream of going up to her, and sitting next to her and taking her in my arms and saying, ‘Look, look at me and listen. You will survive. You will have a family of your own: three children.’ And as hard as it might be to imagine, your daughter will grow up to be a United States senator, represent our country as secretary of state, and win more than 62 million votes for president of the United States.”

She asked the audience to stay strong:

“We have work to do, and for the sake of our children and our families and our country, I ask you to stay engaged, stay engaged on every level. We need you. America needs you, your energy, your ambition, your talent. That is how we get through this.”