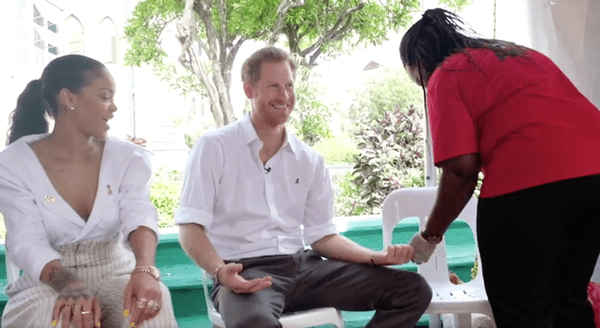 Prince Harry convinced pop singer Rihanna to take an HIV test with him in front of cameras on World AIDS Day to prove to people how easy it is to get tested and to fight stigma against the disease.

The pair, who appeared on stage together on Wednesday night at Barbados’s 50th anniversary of independence celebrations, had the finger prick procedure during a visit to a HIV drop-in centre targeting Bajan men in the capital Bridgetown.

The Prince had persuaded Rihanna to take the test with him when he chatted to the singer backstage at the concert.

The pair spoke with an HIV counsellor while in Barbados and things got a bit awkward as the conversation turned to sex.

Those comments elicited laughter from the assembled crowd.

Kensington Palace shared video of Prince Harry and Rihanna receiving their HIV tests, which came back negative, on Twitter. The Royal Family also shared it on Facebook, writing,

December 1st is World Aids Day; during his visit to Barbados Prince Harry has seen how the country has eradicated mother to baby HIV transmission, something to be proud of. However, there is still too much stigma on HIV and AIDS in the Caribbean- it’s time to end it.

Barbados has committed to offer treatment to all people with HIV – if you get tested, you will get treatment, and you’ll live a long, happy life. If we all get tested, we can shatter the stigma on HIV for everyone.

— The Duke and Duchess of Cambridge (@KensingtonRoyal) December 1, 2016

Earlier this year, Prince Harry made history when he live-streamed his receiving an HIV test.

Harry’s fight against HIV/AIDS is a continuation of the work done by his late mother, Princess Diana, to end stigma surrounding the epidemic. Harry’s recording his HIV tests reminds many of the image of Princess Diana visiting and making physical contact with AIDS patients at a time when many believed the virus could be transmitted via human touch.