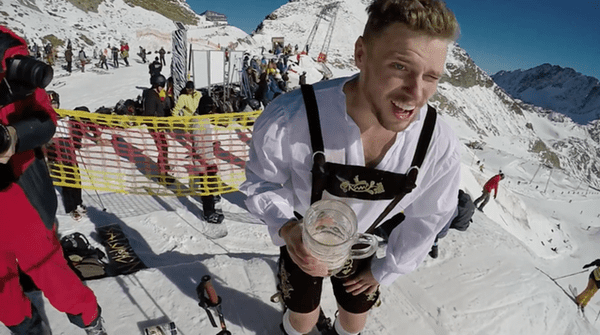 Out Olympic free-skier Gus Kenworthy has started his own YouTube channel and for his first video he took viewers with him as he journeyed to Austria.

Kenworthy ended up in Austria on Halloween, one of his favorite holidays, and decided to dress up while he hit the slopes. Last year, Kenworthy showed off three Halloween costumes on Instagram, a Mean Girls ‘slut-mouse’, a sexy cop and a Native American chieftain (a costume which stirred a controversy at the time).

This year, Kenworthy decided to dress up as a ‘traditional Austrian’ while he hit the Alpine slopes. Stripping out of his everyday ski gear, Kenworthy donned some fetching lederhosen and added a stein of beer to complete the look. He then proceeded to chug his massive beer and head down the slopes to do some aerial tricks.

The only problem is that beer chugging and ski-jumping don’t exactly go well together. Moments after finishing a jump, Kenworthy hurled all the beer he had just ingested all over the slopes.

Turns out there’s more than one type of yellow snow you need to be afraid of.