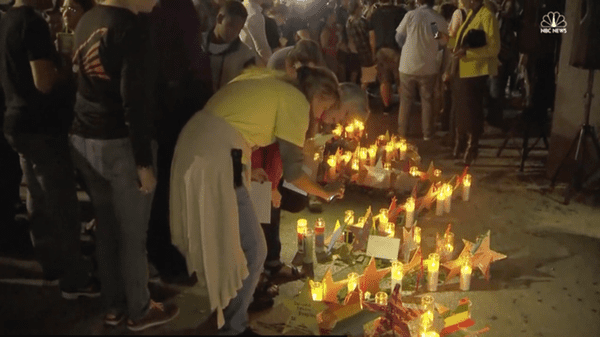 Monday marked the 6 month anniversary of the Pulse nightclub massacre that took the lives of 49 people.

The Orlando mass shooting was the deadliest terror attack on U.S. soil since 9/11 and also the worst anti-LGBT hate crime in American history. As the attack happened on the club’s Latin night, victims were predominantly Latinx and LGBT.

Family, friends and loved ones of the victims gathered at a special candle-light vigil early Monday morning to remember those they lost to a senseless act of hate.

At 2:02 a.m. early Monday morning—the exact time lone gunman Omar Mateen opened fire inside the club on the night of June 12—mourners gathered in the nightclub’s parking lot to light candles and stand in silence. Star-shaped cutouts bearing the names of all 49 killed in the shooting stood propped up on the pavement in the shape of the Pulse logo, each name surrounded by delicate white roses. […]

As the names of the mostly Latino, LGBTQ victims were read out loud, many in the crowd could be seen crying and covering their faces in grief as they reached out to comfort one another.

Once all 49 names were read, the small crowd stood in near-silence, only the quiet sounds of weeping and nearby traffic to be heard.

More from The Orlando Sentinel:

Tall, white candles were set up in a pulse pattern on the ground near the entrance of the club. They held up multi-colored stars with the names of each of the victims. White and red roses bordered the arrangement.

The crowd gathered around the memorial. Many wore black as a sign of mourning or a shirt with their loved one’s face on it. Some brought flowers to honor a friend or family member lost in the shooting.

A Christmas tree also stands outside the nightclub as a symbol of how much time has passed since the June attack.

“Makes me so sad to see it dark,” Dewey said. “Beyond the fence, I see the walls of a building that used to be so filled with life,” Dewey said.

Pulse owner Barbara Poma announced Friday that she plans to reopen the nightclub in another location, but hasn’t said where or when that will be.

Watch news reports on the 6 month anniversary of the attack, below.

Miami police have been training for a Pulse-like scenario in which victims are trapped inside a nightclub since the June 12 attack.