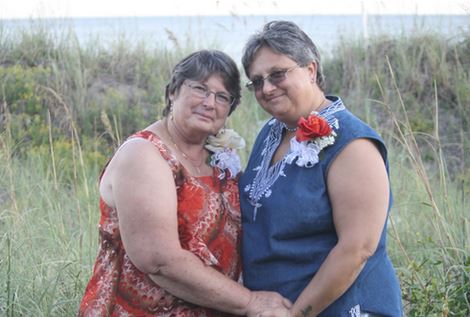 Walmart has settled a discrimination lawsuit against the company for denying health insurance benefits to same-sex spouses.

In 2014, GLAAD filed a charge of discrimination on behalf of Jacqueline Cote (above right), a Walmart employee who was denied health benefits for her wife.

Under the settlement announced Friday, Walmart will set aside $7.5 million, mostly to compensate employees affected during the three years before January 1, 2014, when the company changed its policy. According to the New York Times, more than 1,000 people may be eligible.

Cote worked at Walmart from 1999 through early 2016. In 2004, she married Diana Smithson (above left), another Walmart employee. In 2008, Smithson left the company to become the primary caregiver for Cote’s mother. Around that time, the company blocked Cote’s efforts to sign her wife up for spousal health insurance. In 2012, Smithson was diagnosed with ovarian cancer. The couple ran up uninsured medical expenses of around $150,000 over the next few years.

“We’re happy both sides could come together to reach a resolution. We will continue to not distinguish between same- and opposite-sex spouses when it comes to the benefits we offer under our health insurance plan.”

Peter Romer-Friedman, one of Cote’s lawyers, added “we are glad that as part of the settlement Walmart will continue to provide the same health insurance benefits regardless of the gender of the associate’s spouse.”