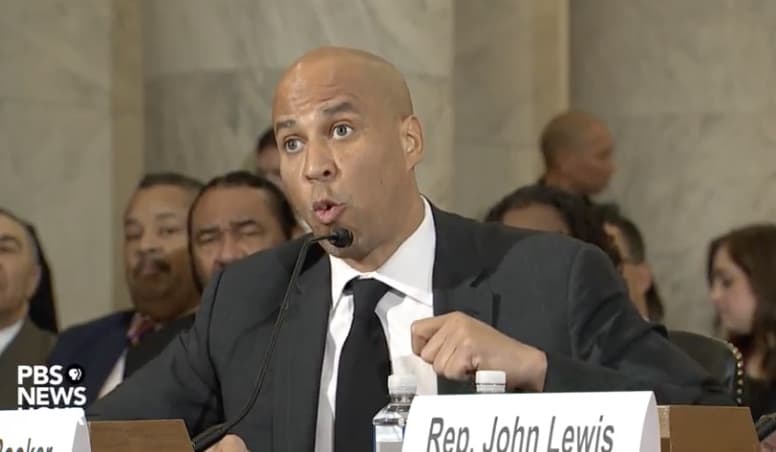 Senator Cory Booker (D-NJ) became the first senator to testify against another sitting senator in a Cabinet confirmation hearing when he testified against Senator Jeff Sessions (R-AL) nomination as Attorney General.

Said Booker, in part (as prepared):

One of the victories of the Modern Civil Rights movement was the 1957 Civil Rights Act, which in effect made the Attorney General not only the chief law enforcement officer of the United States, but also vested in the office the responsibility to pursue civil rights and equal protections for all in America.

Senator Sessions has not demonstrated a commitment to a central requirement of the job — to aggressively pursue the congressional mandate of civil rights, equal rights, and justice for all. In fact, at numerous times in his career, he has demonstrated a hostility toward these convictions, and has worked to frustrate attempts to advance these ideals.

If confirmed, Senator Sessions will be required to pursue justice for women, but his record indicates that he won’t.

He will be expected to defend the equal rights of gay and lesbian Americans, but his record indicates that he won’t.

He will be expected to defend voting rights, but his record indicates that he won’t.

He will be expected to defend the rights of immigrants and affirm their human dignity, but his record indicates he won’t.

His record indicates that as Attorney General he would obstruct the growing national bipartisan movement toward criminal justice reform.

His record indicates that we cannot count on him to support state and national efforts toward bringing justice to a justice system that people on both sides of the aisle readily admit is biased against the poor, drug addicted, mentally ill, and people of color.

His record indicates that at a time when even the FBI director is speaking out about implicit racial bias in policing and the need to address it; at a time when the last two Attorneys General have taken steps to fix our broken criminal justice system; and at a time when the Justice Department he would lead has uncovered systemic abuses in police departments all over the United States including Ferguson, including Newark; Senator Sessions would not continue to lead urgently needed change.

The next Attorney General must bring hope and healing to our country, and this demands a more courageous empathy than Senator Sessions’ record demonstrates.