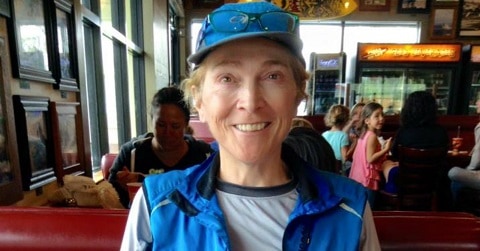 New York City has issued what is thought to be the country’s first intersex birth certificate.

The certificate was issued last week to 55-year-old Sara Kelly Keenan (above) who was born with male genes, female genitalia and mixed internal reproductive organs.

Last September, Keenan made headlines when a judge allowed her to become the first California resident to change her gender to “non-binary.”

55-year-old Sara Kelly Keenan received something in the mail she's been waiting for her entire life: the first… https://t.co/lBl45kvEIJ

Like many people born intersex, Keenan was unaware of her anatomical reality for most of her adult life, because her parents and doctors agreed to keep it secret. When she was born in New York City a half-century ago, she was classified as a boy for three weeks—then suddenly issued a female birth certificate.

Back then, intersex people were called “hermaphrodites,” and doctors typically recommended surgery to make them conform to one of two genders. Keenan started a lifetime of hormone replacement therapy at age 16, vaguely informed that she was “a girl that can’t make hormones.” Her father confessed to her in 2012 that doctors had suggested a penis be constructed to match her genitalia to her male chromosomes, but he had declined. She has since undergone endocrinological testing to confirm her intersex status.

“Not all intersex people will choose to identify legally as intersex,” Keenan told NBC Out, “and not all parents will choose to have their intersex child identified as intersex on birth documents. But for those who do, the option must exist.”

Keenan said she embraces her intersex identity and wants to pave a “legal way for other intersex people who choose to embrace it in the same way to do so with a legally recognized sex marker.” After a long life filled with what she called “lies and deception,” Keenan has been newly energized by what she said is a mission to fight society’s ignorance of the intersex community.

Alesdair Ittelson, Deputy Legal Director at interACT, an intersex advocacy group, said that the organization is aware of one other reissued birth certificate that reads “hermaphrodite” and several that do not have a sex specified. However, Ittelson believes Keenan’s to be the first intersex birth cert.

RELATED: There Is a 1 in 100 Chance You Are Intersex

“The Department will continue to work with community partners as we adopt changes to more accurately reflect a person’s sex.”

“In the United States, birth certificates often provide access to a wide range of public services and critical identity documents, such as state IDs and passports. Having birth certificates with gender designations other than male or female provides an enormous sense of validation for a number of non-binary and intersex people.”

Keenan now has two legal genders: non-binary according to the courts and intersex according to her birth records. She has had meetings with the California Department of Motor Vehicles to discuss changes in the driver’s license system that would allow her to update her ID.

Watch Buzzfeed’s “What’s It Like To Be Intersex” below.