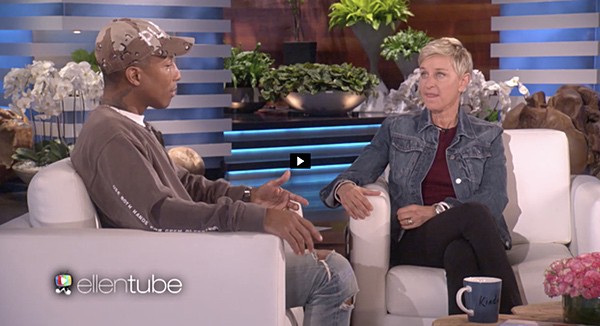 Pharrell was scheduled to sing a track from the new film Hidden Figures with gospel singer Kim Burrell on Ellen this week, but as you probably know, a sermon in which Burrell called gay people “perverted sinners” went viral over the weekend.

Said Burrell in her sermon:

Ellen said she needed to address the controversy and why Burrell was axed from the show:

“She said some very not nice things about homosexuals, so I didn’t feel that was good of me to have her on the show to give her a platform after she was saying things about me.”

“There’s no space, there’s no room for any kind of prejudice in 2017 or moving on. There’s no room. She’s a fantastic singer and I love her just like I love everybody else. We all have to get used to everyone’s differences and understand that this is a big, gigantic, beautiful, colorful world and it only works with inclusion and empathy. It only works that way. Live and let live. Love and let love.”

“Agreed. I think I say it all the time. To me, when I say, ‘Be kind to one another,’ I feel that. Because, as someone who has received a lot of hate and prejudice and discrimination because of who I choose to love, I just don’t understand anyone who has experienced that kind of oppression or anything like that, now…it only gives me more compassion. It gives me more empathy. I don’t ever want anyone to feel hurt because they are different.”

Previous Post: « Adidas Releasing Rainbow Ultra Boost to Support LGBT Pride
Next Post: ‘Gays for Trump’ is Hosting a ‘DeploraBall’ Gala the Night of the Inauguration »