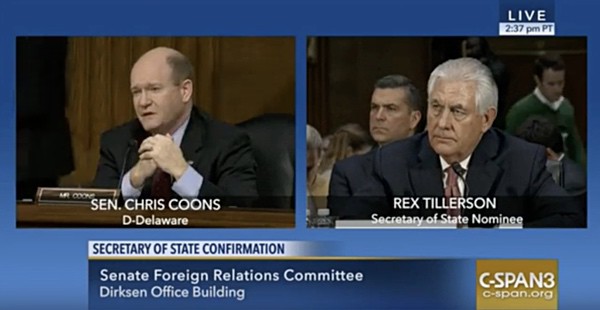 AND DON’T MISS: Rachel Maddow: Exxon CEO Rex Tillerson as Sec’y of State is $500 Billion Gift to Putin and Himself

“I was encouraged by your tough leadership moment at the Boy Scouts and I simply wanted to reassert that in my work around the world although not easy or comfortable I think that it is important that we include respect for the whole range of people’s relations in our menu of how we define human rights.”

CNN made note of ExxonMobil’s poor record on LGBTQ rights:

When Exxon (XOM) merged with Mobil in 1999, it eliminated Mobil’s domestic partner benefits for gay and lesbian employees and removed a policy preventing discrimination on the basis on sexual orientation, according to HRC. At the time, Tillerson was a senior executive responsible for the company’s operations in Russia.

When the Human Rights Campaign launched its Corporate Equality Index in 2002, Exxon received a score of 14%. The survey rates companies on policies, benefits and practices for LGBTQ employees and their families.

Tillerson, now 64, became chief executive in 2006. That year, the index changed its criteria, and Exxon’s score went down to 0%.

Since Tillerson took over, ExxonMobil has slowly made improvements — though that may have more to do with federal policy changes than moral leadership.

Ironically, Tony Perkins, the leader of the hate group Family Research Council and an evangelical ally of Donald Trump, is roiling over Trump’s decision to pick ExxonMobil CEO Rex Tillerson for Secretary of State. Why? Not for the reasons most are troubled. Tillerson was for gay troop leaders in the Boy Scouts.