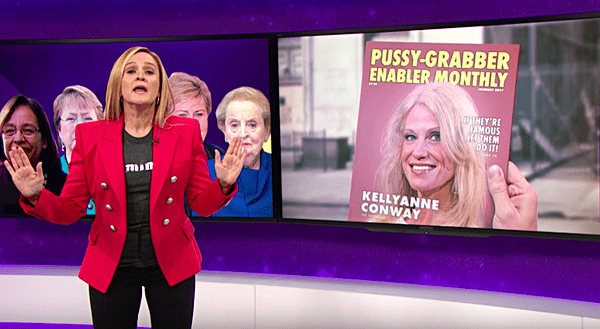 Bee also went to town on conservative news anchors questioning why Conway didn’t get the same treatment as left-wing feminists, like being put on the cover of Vogue.

“It’s so unfair! A woman pulls off the historic feat of electing a sexual predator who thinks women should be punished for having abortions, and feminists don’t celebrate her with a Vogue cover! Although…she did get the cover of Pussy-Grabber Enabler Monthly so that’s something.”

Bee then went on to look at Conway’s homophobic and sexist career, and also her career-minded hypocrisy, like back during the campaign when all she did was attack Trump.

“We haven’t seen a blonde do this much spinning and lying since Tonya Harding!”

Finally, Bee wonders why Kellyanne isn’t the president rather than Trump:

“Why the hell is he president instead of her? Kellyanne is the soulless Macchiavellian despot America deserves…lean in bitch! You’re the one with superpowers! You changed history and also possibly ended it. So Kellyanne, welcome to the Hall of Fame. If you want to pick up your award it will be behind the studio in the alley where women will be getting their abortions a year from now!”