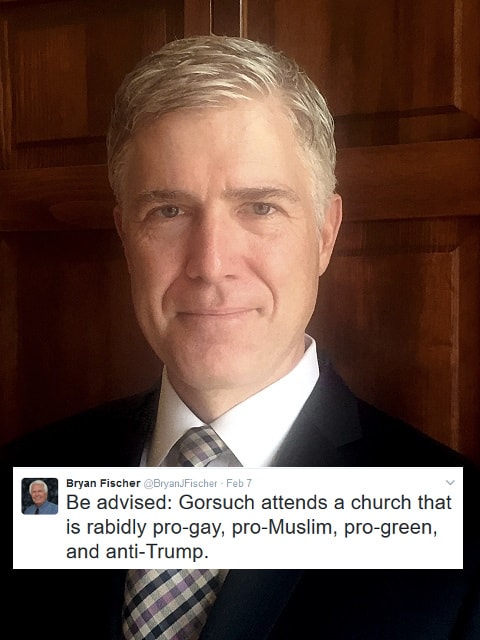 God-bothering windbag Bryan Fischer (below right) has a history of attacking Christian evangelicals who are just not quite Christian or evangelical enough so it makes sense that he would be unimpressed Donald Trump’s Supreme Court nominee Neil Gorsuch (above) for attending a church that is not as rabidly homophobic as he would like.

Be advised: Gorsuch attends a church that is rabidly pro-gay, pro-Muslim, pro-green, and anti-Trump. https://t.co/7az8qnAGKk

The New York Times notes that the Episcopal Church “has become LGBT-affirming over the past several years, blessing same-sex marriages and ordaining LGBT clergy.” 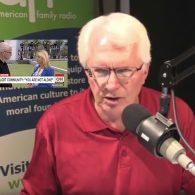 The church has also ordains women priests, is concerned about environmental issues and opposes discrimination against people of other faiths.

The day after Trump was elected, St. John’s rector the Reverend Susan Springer, urged congregants to behave in a godly fashion even though “the world is clasping its head in its hands and crying out in fear.”

Following the Pulse nightclub massacre last year, church officials decided to ring its bells 49 times, for each of the 49 people killed every Wednesday until Election Day to call on Congress to take action against gun violence.

According to the Daily Mail, Gorsuch often serves as an usher at the church. His wife sometimes leads prayers and reads Scripture and their daughters participate in services as acolytes.

Predictably unimpressed by such Christian notions, on Tuesday Fischer tweeted: “Be advised: Gorsuch attends a church that is rabidly pro-gay, pro-Muslim, pro-green, and anti-Trump.”

Gorsuch appears to have been listed as an usher at an LGBT-affirming Episcopal Church
St. Johns in Boulder, COhttps://t.co/4XY6g9LrLy https://t.co/xQA7HpyJ1g

Fischer later claimed that his tweet was aimed at the church rather than at Gorsuch. Hmm…

.@PinkNews To halt the spread of fake news, I did NOT say "Don't trust SCOTUS nominee." Tweet was not about Gorsuch but about his church.

News of Gorsuch’s relatively liberal form of Christianity is likely to leave many evangelical trolls riled up, perhaps NOM’s Brian Brown more than others. Trump recently held a meeting with a number of right wing leaders to rally them behind his nomination of Gorsuch. Brown was not among those invited which included Wayne LaPierre, head of the National Rifle Association; Paula White, Chairman of the Evangelical Advisory Council; and Charmaine Yoest with American Values.