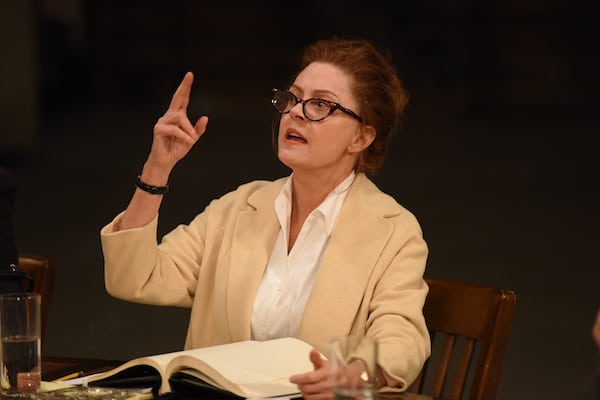 After last week’s epic Oscars episode, you’d think the last two people to ever work together again would be Bette Davis and Joan Crawford. However, months have gone by, and neither Bette nor Joan have been able to truly capitalize on Baby Jane’s success. “If you think it’s twilight for us,” Warner warns Bob Aldrich, “it’s midnight for them!”

That desperation is part of what drives Crawford and Davis back together for another picture. That should make for some deliciously devilish TV, but this week’s installment, “Hagsploitation,” is a bit of a letdown. Feud is at its best when the spotlight shines on the titular characters coming to blows. This episode had a lot of sideplot to sludge through en route to the actresses’ reunion on the set of What Ever Happened to Cousin Charlotte?.

For starters, Joan is in the thick of her promotional touring supporting her latest psycho-biddy flick, Strait-Jacket. It’s a campy slasher with Crawford portraying an ax-wielding murderess. The screenings feature director William Castle (expertly portrayed by gay icon John Waters) introducing Crawford as she enters from the back of the theatre swinging an ax. The young crowd eats it up, hooting, hollering and tossing popcorn at the screen legend.

The exhausting travel and humiliating exhibitions are just the start to Joan’s troubles. An ailing Hedda Hopper comes to visit, and she’s got news. She had a heart attack recently, and it’s had her look back on her legacy. She’s not ashamed of all the gossip-mongering she’s done. Quite the opposite, actually. She’s proud to have shut down all the queers, reds, dope-fiends, whores and others. Speaking of the morally bereft, she’s heard rumor that someone has been trying to sell an old “blue” movie she made way back in the day. Hedda thinks this could be her last big scoop, and she offers Joan the chance to control the narrative. Crawford wants to get ahead of the story, but not like this.

Instead, she goes to confront her brother. She offers him a bit cash to ask him not to share the tape, but she can only offer a fraction of what the gossip rags are willing to pay. 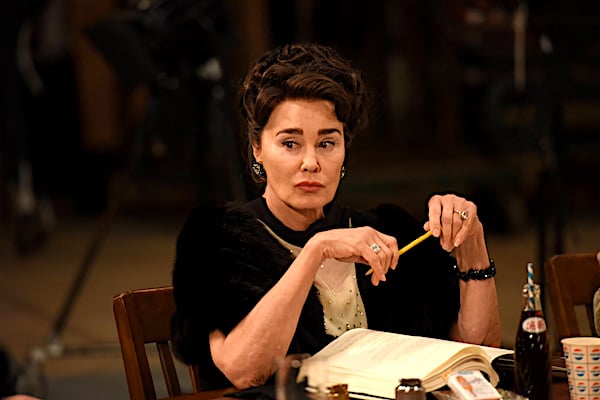 Joan needs another payday, and she’s not the only one. Jack Warner is worried the culture is passing him by, so he calls in Bob Aldrich. Luckily, Aldrich has a script that’s sure to capitalize on the hagsploitation trend Baby Jane started (and Warner claims he named). It’s an unpublished short story by the same author as Baby Jane. Warner, of course, demands Davis and Crawford reunite, and we’re back to square one.

Aldrich meets with Joan and Bette separately, and they’re obviously skeptical. But they’re also not in a position to be that picky. Davis negotiates creative control, while Crawford’s demands include top billing and advanced payment. She needs that money to payoff her brother. She manages to catch him literally right before he’s about to be wheeled into surgery. Their short confrontation shades a lot of Joan’s backstory, how she was the runt that wasn’t wanted, how she brought her ailing mother to Hollywood when she was dying, but wouldn’t let her eat with the children. Feud wants us to know that hurt runs deep in Joan, and just after her brother has served his narrative purpose, he dies in surgery.

Without that extortion hanging over her head, she doesn’t need the money from the film with Davis so desperately. But for Joan, it’s not about the money. If she’s not working she might as well be dead, too.

Now that Aldrich has Davis and Crawford on board, there’s one more piece of business to take care of. Warner is ready to toast their future success, but Aldrich drops a little bomb on him that actually he’s bringing the picture to a rival studio where he’s treated with a little more respect. Warner won’t have Aldrich to push around anymore. 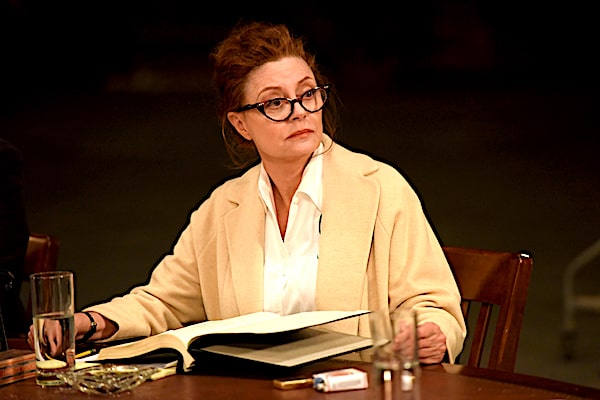 Don’t think this means Bob is done being walked all over just yet. Ahead of the first table read for Charlotte, Joan offers a very Joan sort of apology, complete with a box of matches to symbolically burn the past behind them. Bette is unmoved, but she tells Joan that it is in both of their interests if they unite on this project in one voice, “preferably mine.”

Their truce is short lived. After haranguing Aldrich about script changes, a photographer shows up at the reading (clearly coordinated by Crawford) and Davis storms out. Aldrich is having no luck with the women in his life, it seems, as his wife tells him she’s leaving him the night before he leaves to shoot in Baton Rouge. 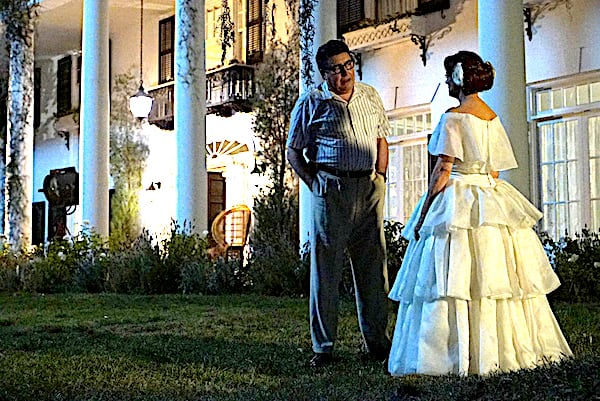 He breaks down one night on set, and Bette comforts him, offering to be “alone together.” After all, she’s made it through four divorces herself.

When Joan arrives down south, she’s shocked there’s no car waiting for her at the airport. It takes hours for her to get to the hotel, where she learns there’s a problem with her reservation. Enter Bette, all smiles and congeniality with staff and crew. She helps Joan with the reservation and skips off with her champagne.

Joan finally arrives in her less than glamorous room and calls Aldrich. In the background she can hear Davis laughing and living it up.

Best Barbs:
“Be careful going up the stairs, you’re blotto!” — Mamacita to Joan

“Is she crossing the desert on foot?” — Hedda wondering why Joan needs so much time to prep for her tour

“If you think it’s twilight for us, it’s midnight for them!” — Jack Warner on Bette and Joan

“I wouldn’t piss on Crawford if she were on fire!” — Bette Davis

“I mean, really, is that a face America wants in its living room at dinner time? I don’t think so.” — Joan Crawford

“I came here to get my balls back. Do you hear ‘em clanking?” — Bob Aldrich

“Can I use them to set you on fire?” — Davis reacting to her gift from Joan

“Brando isn’t begging for a recurring role on Wagon Train either.” — Crawford

Round 6 goes to: Bette Davis. The episode might have been a showcase for Jessica Lange’s incredible work as Joan Crawford, but it seems that Davis handles the indignities of Hollywood a lot more gracefully than the rigid Crawford. She already seems to have the set of Charlotte under her thumb (and most folks will recall how that all shakes out).