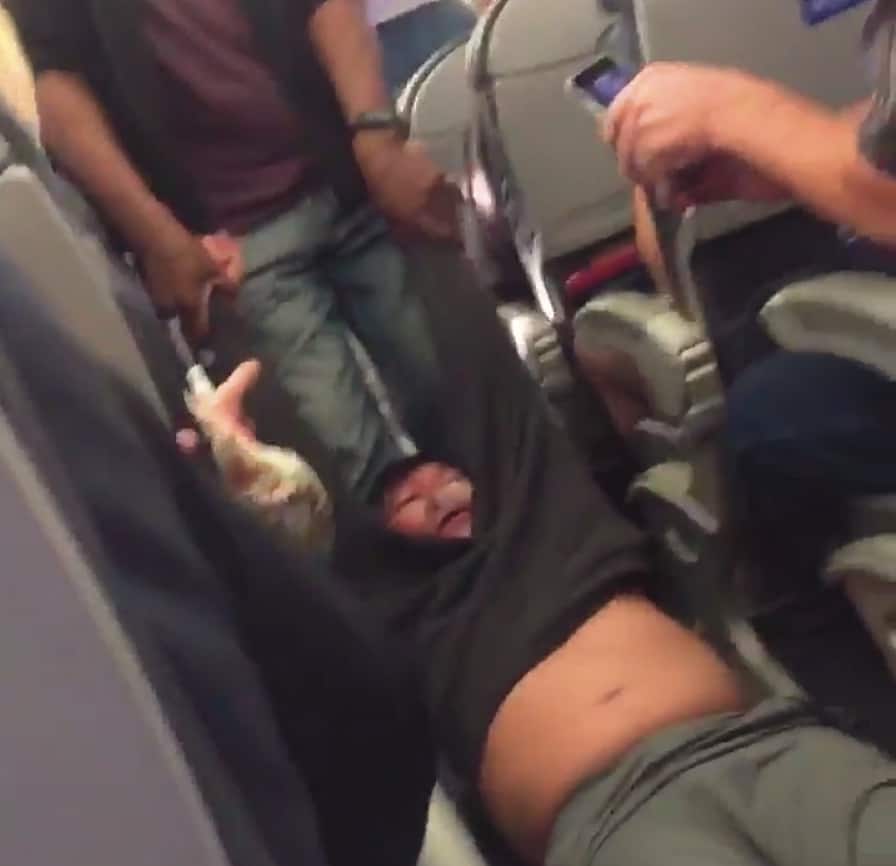 Passengers on an overbooked United Airlines flight from Chicago to Louisville were treated to a horror show on Sunday night when the airline announced that four passengers would be randomly selected to get off the plane.

One passenger refused, a man who claimed to be a doctor with patients to treat in the morning, and so the airline sent three men in to physically remove him.

The horror was captured by passengers on video, the Courier-Journal reports:

The 31-second clip shows three men wearing radio equipment and security jackets speaking with a man seated on the plane. After a few seconds, one of the men grabs the passenger, who screams, and drags him by his arms toward the front of the plane. The video ends before anything else is shown.

A United spokesperson confirmed in an email Sunday night that a passenger had been taken off a flight in Chicago.

The man can be seen bleeding from the lip, and several passengers point it out in the video.

@United overbook #flight3411 and decided to force random passengers off the plane. Here's how they did it: pic.twitter.com/QfefM8X2cW

One passenger gave her story to the Courier-Journal:

One couple was selected first and left the airplane, she said, before the man in the video was confronted.

Bridges said the man became “very upset” and said that he was a doctor who needed to see patients at a hospital in the morning. The manager told him that security would be called if he did not leave willingly, Bridges said, and the man said he was calling his lawyer. One security official came and spoke with him, and then another security officer came when he still refused. Then, she said, a third security official came on the plane and threw the passenger against the armrest before dragging him out of the plane.

The man was able to get back on the plane after initially being taken off – his face was bloody and he seemed disoriented, Bridges said, and he ran to the back of the plane. Passengers asked to get off the plane as a medical crew came on to deal with the passenger, she said, and passengers were then told to go back to the gate so that officials could “tidy up” the plane before taking off.

Here’s a video of the man running back on to the plane, which took off two hours late:

@united @CNN @FoxNews @WHAS11 Man forcibly removed from plane somehow gets back on still bloody from being removed pic.twitter.com/njS3nC0pDl

UPDATE: United has released this statement.

Previous Post: « Billy Hough’s Unfaithful Lover Inspired Him to Write a Heartbreaking Ballad: WATCH
Next Post: Bette and Joan Go Another Desperate Round on ‘Feud’ – RECAP »