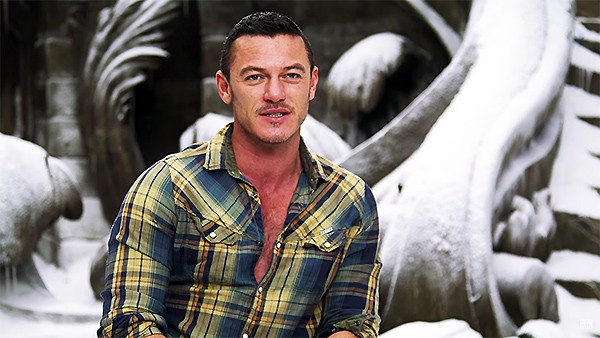 Actor Luke Evans gave a slightly defensive interview in the premiere issue of British luxury magazine The Jackal on the life of acting, particularly as an openly gay man.

The 37-year-old Welshman was seen most recently as the camp villain in Disney’s live action Beauty and the Beast, with the film itself having drawn attention for its passing nod to gayness. Evans came out at 22 to The Advocate, while still primarily a stage actor—his crossover to film came later, seven years ago. Having made his entree through action-centered roles such as those in The Clash of the Titans, Robin Hood, and The Immortals, he has more lately made the shift into more brooding, complex characters, in films such as the independent High Rise and the husband in last year’s blockbuster The Girl on the Train.

When pressed, he seems diffident, almost resentful, on assessing his sexuality and its relevance to his career:

“I try to keep my personal life and my private life separate,” he says, his tone now more controlled, but not frosty. “Not for any reason other than there’s a clue in the title – it’s private. As an actor you have to keep some sort of enigma and mystery. There’s a dignity to keeping private. I’m trying to keep a bit of dignity to my private life and to protect the people in my life. Like my family. They don’t do press. They don’t do interviews. I don’t get photographed with them. Although everyone knows they’re my mum and dad in the Valleys. It’s the choice I’ve made.”

Can Hollywood cope with the idea of a gay action hero? “That question is difficult to answer,” he says. “I don’t know how ‘Hollywood’ as you call it, thinks. I don’t think about it. I don’t feel they’re connected. Talent, success, what you do in your personal life—I don’t see how one should have an effect on the other. I don’t think I’d be in this business if I felt that I was not being employed because of who I am in my personal life.”

Perhaps because of his stance, he is one of the first openly gay actors not to be labelled as such. Or perhaps this is simply a sign that audiences have moved on. Either way, there’s a more pressing issue at hand, which is Evans’s future. What does it look like? And where does he fit in among that mid-to-late 30s generation of British talent, compared to whom he’s still less well known, at least on this side of the Pond?

Given that his films have grossed close to four billion dollars overall, Evans seems content to be nonchalant about his sexual identity, at least in this one interview. The complex discussion of Hollywood’s ambivalent treatment of LGBTQ characters and issues in its films remains one on which his input might have been more thoughtfully contributed, perhaps, but instead his success speaks for itself.