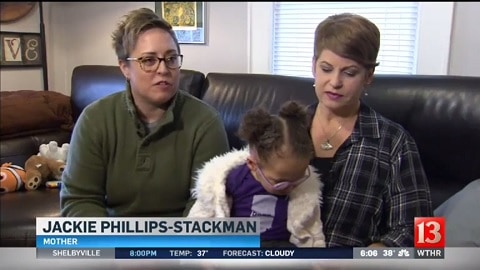 A lesbian couple on Monday had a case heard to determine if Indiana’s law preventing them from both being named on their child’s birth certificate is discriminatory.

Jackie and Lisa Phillips-Stackman’s case was heard by a three-judge panel for the Seventh Circuit Court of Appeals. The couple’s daughter Lola was born from Jackie’s embryo, fertilized by a sperm donor and carried by Lisa.

Indiana is appealing an earlier ruling which ordered the state to recognize both parents on the birth certificates of children conceived using a sperm donor. The Phillips-Stackman’s case argued that parental recognition should be a benefit conferred by the U.S. Supreme Court’s marriage equality ruling in 2015, reports IndyStar.

Not recognizing the non-birth mother, the lawsuit said, could make it more difficult for families to be covered by insurance policies or for the parent to enroll her child in school.

However, on Monday Judge Diane S. Sykes argued that the couple’s lawyer was making an argument that wouldn’t hold up under scrutiny. “You can’t overcome biology,” she said. “If the state defines parenthood by virtue of biology, no argument under the Equal Protection Clause or the substantive due process clause can overcome that.”

Judge Diane S. Sykes drew distinctions between biological parentage and parental rights, and which of the two should be represented on birth certificates. “You can’t overcome biology,” Sykes said. “If the state defines parenthood by virtue of biology, no argument under the Equal Protection Clause or the substantive due process clause can overcome that.”

“Your Honor, with all due respect, we maintain that parenthood is no longer defined by biology,” said Karen Celestino-Horseman, the attorney for eight same-sex couples who brought the lawsuit against the state for only allowing only a mother and a father to be named on birth certificates. “That’s a policy argument to take to the legislature,” Sykes responded.

Last year Diana Sykes was on an early Trump shortlist for the Supreme Court.

You can listen to the oral arguments here and watch an interview with the couple below.

Previous Post: « Celine Dion Honors Manchester Bombing Victims in Emotional Hand-Holding Tribute: WATCH
Next Post: Gay Adult Film Star Kayden Gray: ‘I Would Like Everyone to Know That I am HIV Positive’ – WATCH »